One Direction returned to their singing competition roots on Thursday, wowing fans with a performance of their hit ‘Live While We’re Young’ on The X Factor US.

But a solid performance wasn’t the only thing the boys were unveiling. They also dropped some exclusive details about their personal lives

Our friends at Hollyscoop caught up with the teenage ladykillers at Thursday night’s episode of “The X Factor.”

On their romance-infused lyrics, the guys said they draw from real life experiences.

Both Louis Tomlinson and Zayn Malik admitted that they are currently in committed relationships, but for the doe eyed Liam Payne—who recently split with longtime girlfriend Danielle Peazer—there was a little sadness in his tone when he spoke. 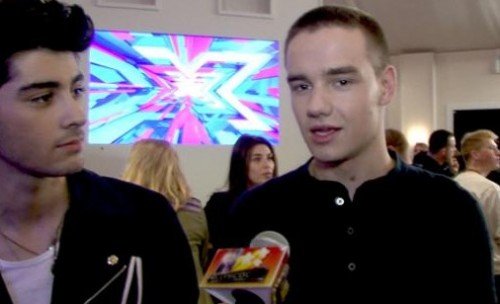 The group’s new album Take Me Home hit shelves on November 9. Their new single from the LP “Kiss You” is particularly moist with audio pheromones.

Going off the theme, HS asked 1D if they had any big plans for their big kiss on New Year’s Eve.

Zayn concurred, “Yeah, my girlfriend too.”

Liam, on the other hand, was a little less sure about who he’d be locking lips with on the first seconds of January 1st. But, being the good mates that they are, Zayn and Louis hopped in to help him decide.

A little confused at what just happened, we asked if it was still up in the air as to who Liam would like to kiss…

In addition to the lighthearted confession, we got down to the bottom of a different inspiration for one of the group’s heartiest heartthrobs, Harry Styles: His tattoo inspiration.

“I just kind of get stuff like my friends, stuff that we’ve done,” said Harry.

The singer recently unveiled his new ink, two black and white mirrored swallows on his chest.

Standing next to group member Niall Horan, Harry highly doubted the squeaky clean Irish teen—the only 1D member without any tattoos—would be getting any ink of his own in the near future.

“I’ve got better things to do in my spare time than sitting for hours and getting a tattoo!” Niall agreed.
By John Howard
READ MORE hollyscoop.com