More than 100,000 people tour the Old Bushmills Distillery every year, making it one of Northern Irelandâ€™s most popular visitor attractions, but this year the distillery itself is set to go on tour as part of a global competition â€“ â€˜Make it 2 Bushmillsâ€™. 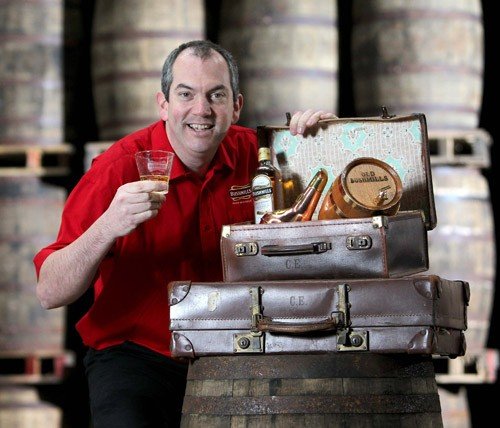 Following the successful Make it at Bushmills campaign in 2010, Make it 2 Bushmills will once again see the small village of Bushmills in County Antrim, become the focus of global media attention as pairs of friends from right around the world compete to win every whiskey loverâ€™s dream prize.

Speaking ahead of the launch of Make it 2 Bushmills on St Patrickâ€™s Day, 17th March, Colum said: â€œAs one of Northern Irelandâ€™s most popular exports, we know that our whiskey is enjoyed by people in countries right around the world, but not everyone can come to Bushmills and experience the distillery for themselves, so we thought it was about time that we visited them.

â€œWeâ€™re going to bring two friends here, give them behind-the-scenes access to the distillery, Â£5,000 spending money, luxury penthouse accommodation and the chance to together make their own unique blend of BUSHMILLS Â Irish Whiskey.

Then weâ€™re going to take the distillery on tour, when we pack up some of the equipment, people and whiskey that make our distillery the home of the worldâ€™s Best Irish Whiskey, and bring them to the winnersâ€™ home town for the ultimate BUSHMILLS party, where the winners and their friends will be the guests of honour.

â€œWeâ€™ll have live music from some of Irelandâ€™s best up and coming musicians, weâ€™ll unveil our winnersâ€™ unique blend and weâ€™ll even toast the occasion with a few bottles of our special Distillery Reserve â€“ a whiskey you can normally only get at the distillery itself.

Make it 2 Bushmills will culminate in a global final â€“ Bushcamp â€“ a three day event taking place on Northern Irelandâ€™s spectacular north coast this August. Two friends from each country, including Northern Ireland, will be voted by the public to go forward to Bushcamp, where they will experience what life at the Old Bushmills Distillery has to offer.

Colum said: â€œAt Bushcamp weâ€™ll be looking for our winners â€“ the two friends who best represent the BUSHMILLS spirit of friendship, so weâ€™ll be challenging our finalists to together try some of the things the team here love to do.

I love my golf, so we might be asking our finalists to together take on my trickiest Par-3 on one of the worldâ€™s biggest bunkers, or, as I like to call it, the beach! We take our whiskey â€˜mixingâ€™ very seriously, so it could be fun to see how our friends get on when it comes to DJing, and weâ€™ve got some keen cyclists here, so we may even organise a tandem race round the distillery!

â€œWeâ€™ll not be forgetting the whiskey of course – weâ€™re also going to test the palettes of our finalists with a series of whiskey challenges.â€

Make it 2 Bushmills will be judged by a panel of famous BUSHMILLS fans, chaired by Colum himself. The full panel will be announced in the run up to Bushcamp.

â€œWeâ€™re looking for real friends, with a genuine love for life and wicked sense of humourâ€, said Colum, â€œand do you know what? Iâ€™m sure weâ€™ll find them.â€

To enter or find out more, visit facebook.com/bushmills1608.