AS a Snow Patrol fan, who loved their last album Eyes Open, when I heard the band were experimenting with their new record I was a bit worried. My first inclination was if it’s not broke don’t fix it but then again no one likes to listen to a different variation of the same song on every album.So with a new open mind and trying not to be bias I put in the headphones and played A Hundred Million Suns, Snow Patrol’s fifth album.
On first listen, the signature Snow Patrol sound is there but it has evolved and has become more adventurous musically. 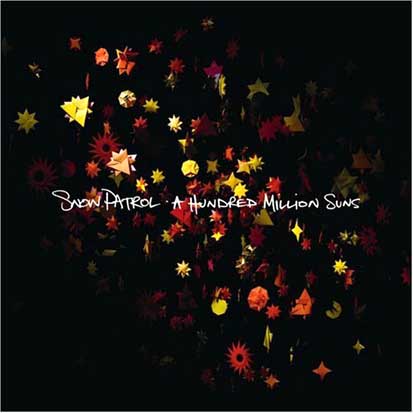 Back on board with producer Garret “Jacknife” Lee, the guys have steered away from the love sick and often depressing songs for a more upbeat view of relationships.
This new positive perspective is quite a departure for The Patrol, whose ballads Chasing Cars and Run have become anthems for the lonely and heartbroken.
Opening with the mid-tempo If There’s A Rocket Tie Me To It, I’m immediately aware that I’m not in Kansas anymore and this isn’t a typical SP song.
The haunting voice of Gary Lightbody lulls as the song builds up to a crescendo of guitars and drums.
Written about Belfast, Take Back The City is the first single from the album and has already become an anthem. Although it’s about songwriter Gary’s love for Belfast, the band shot the video in London – tut tut boys.
Songs like The Golden Floor and Crack The Shutters (my personal favourite) show the band’s growth and development. While raucous tracks like Engines and Disaster Button will be fantastic live.
But not everything is different. The beautiful ballads the band have become known for are still present.
Set Down Your Glass and The Planets Bend Between Us are stunning examples of why I love this band.
Perhaps the most experimental song is the 16 minute epic The Lightening Strike. Split into three sections, it is a stand alone example of how far the band has come and where they are going.
If this is a departure from the norm, I can’t wait to see what Snow Patrol come up with for album number six.A Hundred Million Suns (Polydor) is out now.