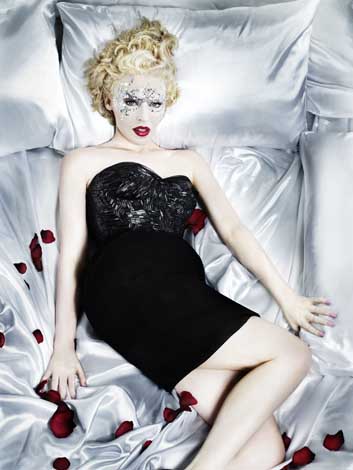 The wait is finally over! On November 26th Kylie releases â€˜Xâ€™, her first new studio album in four years. â€˜Xâ€™ is preceded by the new single â€˜2 Heartsâ€™ on November 12 (available digitally November 5). The Sun have already branded the single a â€œsurefire no. 1â€.

The album, Kylieâ€™s 10th, features 13 new tracks and was recorded in London, Stockholm and Ibiza. â€˜Xâ€™ is Kylieâ€™s first studio album since Body Language in November 2003. It features the first new Kylie material since the greatest hits compilation â€˜Ultimate Kylieâ€™ in 2004.

For months fans have been referring to the title of the new album as â€˜Xâ€™, so when it came to naming the album it was the obvious choice.

The track listing for the album is:
2 Hearts
Like A Drug
In My Arms
Speakerphone
Sensitized
Heart Beat Rock
The One
No More Rain
All I See
Stars
Wow
Nu-di-ty
Cosmic

Along with the new album â€˜Xâ€™, Kylie is starring in a brand new documentary â€˜White Diamondâ€™ which she made with long-time creative director William Baker. White Diamond gives fans the unique chance to see Kylieâ€™s triumphant return to the world stage with her 2006 Showgirl Homecoming Tour. The film shows Kylie as never before with intimate close up back stage footage and interviews including Kylie talking about her feelings, worries and aspirations on how she and her team take Showgirl from rehearsals to the road first in Australia and then to the UK.

The film will be premiered at Vue cinemas across the UK on October 16th, with a DVD release planned for December. The DVD will feature 2 discs, with Showgirl Homecoming Live (recorded in Melbourne, Australia December 2006) as the second disc.
kylie.com