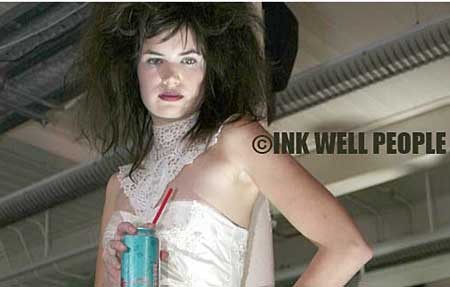 By Andrea Clarke
Photo by Ryan Kennedy
A BELFAST fashion expert has revealed that Northern Ireland designers are hugely lacking in self-confidence.
Una Rodden, a high fashion couture designer, urged aspiring design students in the run up to the new academic term to believe in themselves and never to think they are inadequate compared to their mainland counterparts.
Speaking at the launch of Diet Cokeâ€™s limited edition Design Cans, she said: â€œPeople in Northern Ireland have a tendency to think they aren’t good enough because they haven’t went to the right, prestigious college which is completely wrong, that has nothing to do with it.
â€œJust because you’ve been to college in Belfast doesn’t mean that you’re any worse or any better than anyone who’s coming from Central Saint Martins or any of the colleges in London. I think that’s one of the problemsâ€.
Una, who was one of six leading fashion designers from Northern Ireland and the Republic of Ireland commissioned to create a piece inspired by the Diet Coke Design Cans, says itâ€™s important to have confidence in yourself and your designs.
â€œI think it’s about confidence and not to look down on yourself because you’ve just went to a college in Belfast or you’re just a wee Irish designer and nobody understands youâ€, she said.
â€œThat’s one they have to realise, have confidence in yourself and be willing to work hard.
â€œI think it’s all about having faith in yourself, working hard, be realistic, don’t think you’re going to walk into the big job in Prada but always aspire to be as good as everybody elseâ€.
One of Roddenâ€™s former students is now working as a designer in London, but almost didnâ€™t apply for the job because she didnâ€™t think her qualifications were as good as those in London.
â€œI had a student who was working with me and she’s just left to go to London but she had real reservations because she thought her degree wouldn’t be good enough because she wasn’t from a prestigious college.
â€œShe landed a fantastic head designer position at a jewellery company straight awayâ€.
For Una fashion is about being unique and that is something she practises in her Belfast city centre couture boutique.
She added: â€œI think you have to be one step ahead of everybody as well and try to know what’s coming in next before someone tells you.
â€œAlways try to be different, don’t follow the crowdâ€.
Â©INK WELL PEOPLE