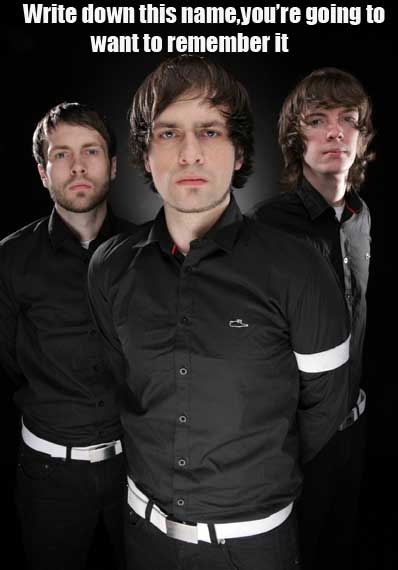 Portadown trio IN CASE OF FIRE have announced a number of headlining shows across Ireland and the UK including a Belfast date in Auntie Annies Attic on Thursday 4th June. ICOF recently announced that they will be the main support on the April Fightstar dates, following up previous tour supports with the likes of Queens of the Stone Age, 30 Seconds to Mars, Funeral for a Friend, Ash and Biffy Clyro, as well as the recent Kerrang UK tour with Bring me the Horizon, Mindless Self Indulgence and Black Tide. Tickets are available at all usual outlets from Friday 13th March.
IN CASE OF FIRE
Venue:Auntie Annies
Date:Thursday 4th June 2009
Ticket Price:Â£7.50 (Subject to booking fee)
Doors:8:00pm
Support:TBC
TICKET DETAILS
In person:From 22 Ticketmaster outlets province wide) / Katy Dalyâ€™s Bar â€“ This Friday
24hr hotlines:Tel: (NI) 0870 243 4455 (ROI) 0818 719 300
Buy online: geturticket.com /ticketmaster.ie
For more see: cdcleisure.com

IN CASE OF FIRE will be also be releasing their second single â€˜The Cleansingâ€™ on March 2nd, a follow up to the MTV2 Spanking New play-listed â€˜This Time we Standâ€™. The track has already received support with Zane Lowe, The Radio 1 Rock Show, Steve Lamacq, twice been played by Jo Whiley on daytime Radio 1, and is now on both the Radio 1 Upfront playlist and the XFM eve playlist. It will be released in the UK through Search and Destroy Records, the new record label venture from Raw Power Management (Funeral for a Friend, B4MV, Fightstar, Gallows) and distributors PIAS. â€˜The Cleansingâ€™ is a heady mix of Muse, QOTSA and Mars Volta style rock and ambition, heartfelt and passionate with epic scope and a mile high chorus. Consisting of brothers Colin (drums) and Steven Robinson (guitars, vocals) and completed by Mark Williamson (bass), the band will see their debut album â€˜Align the Planetsâ€™ set for release on May 11th, with the single â€˜Enemiesâ€™ released just before on May 4th.

As well as completing their debut album â€˜Align the Planetsâ€™ with producer Gil Norton (Pixies, Foo Fighters, Echo and the Bunnymen) the band have already spent 2008 touring across the UK hitting festivals like Download, Oxygen, T in the Park, Rock Am Park and Ring (Germany) and the Reading and Leeds festivals. The band also won the 2008 MTV2 â€˜Spanking Newâ€™ competition, beating the likes of Adele, Foals, Black Kids and Likke Li to the viewerâ€™s choice of bands to watch out for in 2008. More headline dates and major supports TBA through early 09 and around the album.