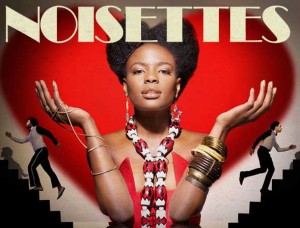 With Noisettes, itâ€™s always best to expect the unexpected. Two years on from a debut album awash with punk spirit and scorching blues-rock, the London trio return with Wild Young Hearts, a set of sleek pop songs steeped in soul, dizzy on disco and harking back to the days of blues and jazz greats.

From the stomping electro-rock of Saturday Night and galloping funk grooves of forthcoming, first single Donâ€™t Upset The Rhythm, to the joyous, jazzy title track, the glorious â€˜60s-tinged soul of Never Forget You and the sultry, shimmering pop of 24 Hours, in Wild Young Hearts, Noisettes have made what is set to be one of 2009â€™s most adventurous albums.

Never fond of a formula, the trio always intended on a radical musical detour from their acclaimed debut, Whatâ€™s The Time Mr Wolf?, an album that spawned five singles and took them on tour for over a year, sharing arena stages with Muse and criss-crossing the States with TV On The Radio and Bloc Party.
Don’t Upset The Rhythm

â€œSome bands stick with the same style forever,â€ says singer Shingai Shoniwa, whose versatile vocals have seen her compared to everyone from Deborah Harry and Kate Bush to Billie Holiday and Diana Ross. â€œThey get together because they share identical musical tastes, then never do anything different. Weâ€™re a gang, but weâ€™re also three divas with different record collections who constantly introduce each other to new sounds, whether itâ€™s African music, jazz, Van Morrison or Black Sabbath. For us, making music means keeping our ears open.â€ 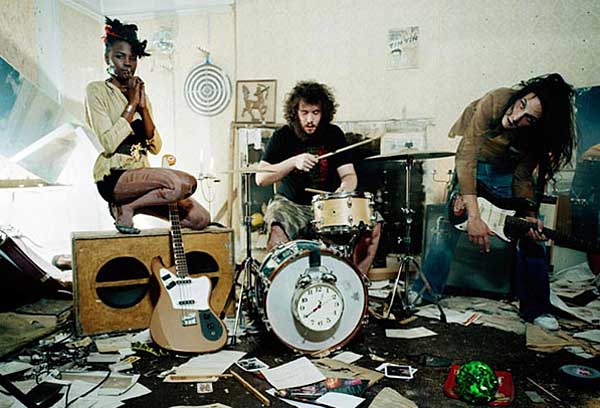 Noisettes certainly took an unconventional approach to starting songwriting. Fresh from tour in summer 2007, guitarist Dan Smith (a man known to pair silver trousers with a yellow, sequinned shirt) and bearded drummer Jamie Morrison (who still seems surprised to be in a band at all) began sonic experiments that involved getting stoned before trips to the Natural History Museum, then attempting to cover the likes of Britneyâ€™s Hit Me Baby (One More Time).

â€œWe wrote over the top of lots of brilliant, outright pop songs, then removed the backing track to see what was left,â€ explains Morrison. â€œNone of what we ended up with appears on the album, but the process inspired us to come up with new ways of songwriting. We also hung out in a lot of clubs, then came home and tried to copy the sounds we liked. That freed us from the conventions of writing guitar-based tunes.â€

Come autumn, the trio piled their equipment in to a van and spent random weeks writing at residential studios in the likes of Devon and Brighton. En route, they listened to early Prince and Portishead, Queen, Talk Talk and Fleetwood Mac. The theme of the songs was captured in the albumâ€™s title.

â€œWild Young Hearts â€“ itâ€™s about feeling young and acting young, whatever your age,â€ says Smith. â€œItâ€™s about having fun and not following the pack. The three of us became genuine friends making this record. We got drunk together and even trashed the odd hotel room. Weâ€™re very different people, but we formed a bond which you can hear in the songs.â€

The new material was road tested at sporadic shows last year, including a performance at South By South West and a tour of France, where Donâ€™t Upset The Rhythm brought the house down every night, convincing Noisettes they were on to something special. Yet the band still werenâ€™t sure how the album would sound until they holed up in a London studio last June with Arctic Monkeyâ€™s producer Jim Abbiss.

â€œWe knew we wanted soul and an atmosphere that captured a specific period of time, the way Portishead albums do,â€ says Morrison. â€œBut we had never played the songs together in a studio. All the parts were demoed separately on computer, with no real instruments. The idea was to feel like we were covering songs we vaguely knew, so the album sounded fresh and spontaneous. It was so much fun we recorded a tune a day and didnâ€™t argue once!â€

Friends came in to add bass parts and strings and both Shoniwaâ€™s little brother (a semi-finalist on TV talent search show Iâ€™d Do Anything) and a baritone from her childhood choir contributed backing vocals. Most striking though is the range of Shoniwaâ€™s own vocals – soft and beguiling on album opener Sometimes, jazzy on the acoustic Atticus, strident and sexy on Donâ€™t Upset The Rhythm and bright and bluesy on the Motown-tinged So Complicated and future single Never Forget You.

â€œI grew up with traditional music from Zimbabwe â€“ Afrobeat mixed with reggae and funk, which my uncles played,â€ says Shoniwa. â€œThen I studied musical theatre, sang in choirs and jazz bands. Dan even got me a job singing vocals in a Diana Ross covers band. Because of that background, I can wrap myself around anything from a sweet soul ballad to a jazz song to noisy rockâ€™nâ€™roll.â€

â€œWe all felt Shingaiâ€™s voice was sitting idle a bit on the first album,â€ adds Smith. â€œBecause most of the songs were guitar based, she had much less to play with. Shingai has an amazing jazz voice, but that didnâ€™t come through before. Now, you can hear all her different moods. How she sings sets the tone for every song. On Never Forget You, sheâ€™s very upbeat and the lyrics sound like a conversation in a bar. On Every Now And Then, sheâ€™s more melancholy and reflective. The contrast is like going out on a Saturday night, then paying for it the next morning.â€

What hasnâ€™t changed with Noisettes is the energy they put in to performing. Described as â€˜the best live band in Britainâ€™ by The Guardian, a recent London show saw Shoniwa charge in to the audience playing guitar and sing clinging to a ladder suspended from the ceiling, a nod to the circus skills she learnt in her teens.

â€œThe idea of putting on a proper show seems to be missing from a lot of young bands at the moment,â€ says Shoniwa. â€œWe always go that extra mile to give the crowd a night theyâ€™ll never forget. I love artists like Hendrix and Bowie who fussed over their hair and took time choosing an outfit.

â€œWeâ€™re not trying to be trendy â€“ we want to make music for everyone â€“ but we put effort in to every aspect of being in a band. Our aim is to prove that pop music can still be alternative and exciting. With this album, I know we can do that.â€

Tickets will be â‚¬16 on sale from all usual Ticketmaster outlets nationwide, booking line no.0818 719 300 and online at www.ticketmaster.ie