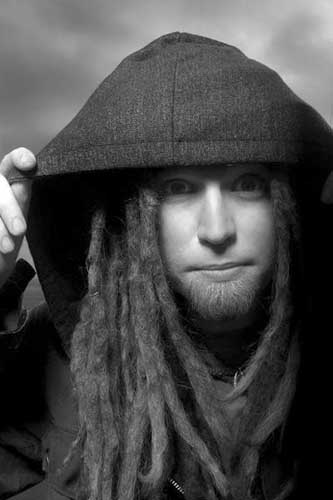 Having recently come from out of nowhere to top the UK album charts with his debut â€œHand Built By Robotsâ€, Newton Faulkner today announces a December show in the Spring & Airbrake. A fantastically talented singer-songwriter (as anyone thatâ€™s heard his hit single â€œDream Catch Meâ€ or cover of â€œTeardropâ€ will know) Newton is currently on tour with the John Butler Trio but is looking forward to his first Irish date â€“ sure to be a sell-out!

NEWTON FAULKNER:
Whatâ€™s that sound? Itâ€™s acoustic guitar like weâ€™ve never heard it before. Itâ€™s things done to six strings that will boggle the ears and eyes. Itâ€™s a throaty but gentle blues croon that speaks of backwoods, beaches and the badlands of, ah, Surrey. Itâ€™s t*u*n*e*s, the likes of which have become a word-of-myspace cult across the Cornwall surf scene and landed prestigious support slots with Jack Johnsonâ€™s cult buddy Donavon Frankenreiter.

Itâ€™s a genius cover of Massive Attackâ€™s Teardrop dropped into a set to silence a rowdy crowd whilst supporting Paulo Nutini during the World Cup or the Python-esque wit with which Newton Faulkner is fast winning over audiences across the UK.

Itâ€™s this inventiveness â€“ this esprit de gig â€“ that made this 21-year-old from just outside London one of the most buzzed-about DIY artists of 2006. With no promotion and bugger-all money his first release, last springâ€™s Full Fat EP, reached Number One on Amazonâ€™s singles chart. The shuffling beats; Faulknerâ€™s laidback scat singing and gutsy holler; the chewy blues riffs; the â€˜tappingâ€™ of strings â€“ these had (pardon the pun) struck a chord with anyone who had stumbled across his shows in the south-west, causing the low-key release to sell-out its 3000 copies. With his wonderfully dexterous approach to guitar, Faulkner is as exciting to watch as he is to hear.

â€˜Tapping,â€™ explains Faulkner, â€˜is prodding the strings really hard with your other hand, your picking hand. You can have stuff coming from both sides of the strings. There are certain frets which work really well â€“ you get two notes and they harmonise with themselves. It sounds like thereâ€™s more than there actually this. Youâ€™re getting stuff out of both sides of the guitar.â€™

But Faulkner doesnâ€™t want to get all Guitar World on our ass, even if he does play his handmade guitar (â€˜itâ€™s been built to take a hammeringâ€™) with proper affection. He just wants to move us, and himself, with his music. Which is why prefers writing while heâ€™s touring rather than while sitting at home.

â€˜Everything makes more sense on the road,â€™ he says. â€˜When youâ€™re not gigging you write stuff thatâ€™s for you in a way that you donâ€™t when out doing gigs in pubs. If youâ€™re doing gigs whilst writing you know what you need, you have a clear understanding of what people like and want â€“ which I canâ€™t seem to remember when Iâ€™m at home. Which is really stupid,â€™ he says with a grin, â€˜but itâ€™s just how it is.â€™
He spent his teenage afternoons teaching himself the guitar after picking one up for the first time aged 13. He progressed so fast that by age 16 he secured a place at the prestigious Academy Of Contemporary Music in Guildford.
Aware that there would be some serious players also enrolling, super-focused kids whoâ€™d been playing since the age of four, this three-year veteran â€“ well, novice â€“ spent the summer before enrolling with a guitar round his neck from dawn to dusk, working on his skills.

His diligence paid off. Under the tutelage of the collegeâ€™s Head Of Guitar, the legendarily innovative guitarist Eric Roche â€“ who sadly died in 2005 aged only 37 â€“ Faulkner rapidly developed. â€˜It was Rock School,â€™ he admits. But while other students were seriously into â€˜heavy metal shredding,â€™ he was pushing on with his own style of rhythmic, percussive playing.

A stint in a teenage wannabe punk-rock band petered out. â€˜I knew we really were a Green Day tribute band when at one gig we played the whole of Dookie, in order.â€™ He played in another outfit called Half Guy â€“ â€˜everyone else was playing angry metal in church halls so we thought weâ€™d be perverse and be the happiest band in town. My guitar was pinkâ€¦â€™ But the responsibilities of being, effectively, the bandâ€™s manager, soon took their toll.

So Faulkner started writing and gigging on his own. A publishing deal and a record deal â€“ the latter with Ugly Truth, a new subsidiary of SonyBMG â€“ quickly followed. His second release, the UFO EP, came out at the end of last year. The lead track, a co-write with his brother, is a rippling, infectious tune that had earned him a standing ovation at one of Jo Whileyâ€™s recent Little Noise gigs (sharing the Union Chapel stage with the likes of Coldplayâ€™s Chris Martin, Lily Allen & The Automatic).
â€˜UFOâ€™ was closely followed by first single proper â€˜I Need Somethingâ€™ which propelled Newton straight onto the Radio 1 Playlist for the first time. Follow-up â€˜Dream Catch Meâ€™ became a much coveted Jo Whiley Record of the Week while full scale nationwide support slots for James Morrison and Paulo Nutini helped send his myspace into meltdown with over 300,000 plays in less than four months.

Prepare to be gobsmacked.