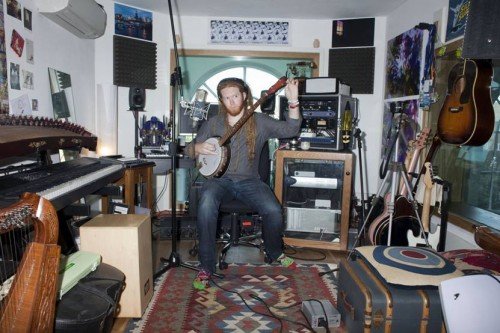 The double number 1, multi-platinum, Brit nominated, acoustic guitar virtuoso Newton Faulkner is about to make a bit of history, as the recording of his fourth album ‘Studio Zoo’ is being streamed live online, 24/7 for 5 weeks from next week, just like ‘The Truman Show’, but for real.

His home studio in East London is set up with 4 cameras, to follow every detail of the ups, downs, dramas and laughs of recording an album.

This will truly be a one-man-band, with no producer or engineer, just Newton, a bunch of guitars, plus a few special surprise guests.
Newton says: “I am as excited as I am terrified by the prospect of having a house full of cameras film me while trying to record an album.

The entire recording process will be streamed live and nothing has been recorded in advance – apart from some particularly good hand claps recorded in Paris.

The album will be made before your very eyes, no tricks, no producer and no engineer, just me, a guitar and a few surprise guests.”

‘Studio Zoo’ will be released on August 26th.