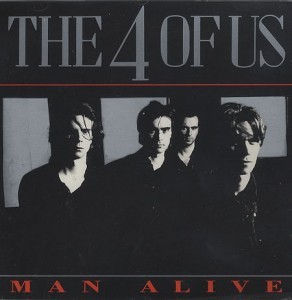 NORTHERN Ireland band The 4 Of Us are headed for The Empire in Belfast this week to celebrate 25th Anniversary of Songs For The Tempted.

This year the Dublin based pop/rock band will release their long awaited seventh studio album as well as play The Empire on March 14 and Vicar Street in Dublin (March 15).

The musical career of Newry-born brothers Brendan and Declan Murphy the songwriting nucleus of The 4 of Us spans more than two decades. They shot to early fame with their debut Songs for the Tempted, which featured the massive hits Mary and Drag My Bad Name Down.

Their follow up Man Alive made Q magazines prestigious Top 50 albums of 1992 and included the UK Top 30 song She Hits Me.

Over two decades the band have notched up a wealth of radio hits and six top 20 Irish charting albums, and their music has also been featured extensively on American, British, and Irish TV soundtracks.

The new album provisionally titled Town On The Border by The 4 Of Us is due for release in mid 2014.

According to the band the new album lyrically explores the brothers early years growing up in Northern Ireland and musically it focuses on the trademark interplay of their acoustic guitars.