Check out the new My Chemical Romance video for ‘Planetary (Go!)’ , filmed at O2 Academy Islington. 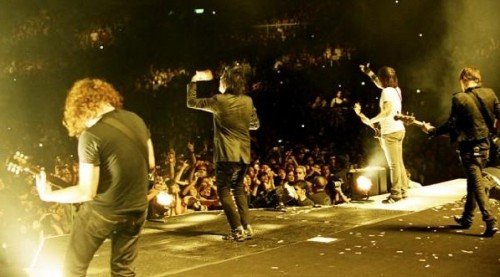 The single ‘Planetary (Go!)’ will be released on March 28th. The track is taken from their current album ‘The True Lives of the Fabulous Killjoys’.

The video was filmed in front of a live audience of just 600 fans who were invited the day before the show and where encouraged to wear dayglo colour to capture the full Killjoys visual theme.

My Chemical Romance played a brief but scintillating set in one of the most intimate venues that they’ve played in years, before the main video shoot commenced.

“We played the short set to thank them for coming then we started making the video together,” said frontman Gerard Way. “The song is about being in a club and dancing, so we thought, ‘Let’s show people what a My Chem show kinda looks like!’ The video shoot had a real party atmosphere and was a really fun way to end our UK tour.”