About the track “Kush,” which is available now, Dre says, “It’s a fun song, it’s hot and people seem to be loving it and that’s an exciting thing because I know if people are loving this song they’re going to really get into the record because this is just the tip of the iceberg.”

The Joseph Kahn-directed video finds Dr. Dre and Snoop Dogg in yet another classic video collaboration but Dre says, “It’s not like ‘getting together with Snoop again,’ we always stay in touch and Snoop is like my little brother so this is just what we do.”

Snoop Dogg agrees, “Dr Dre, that’s my big homeboy, that’s my big brother. He gave me my start. so whenever he calls me to come through and do what I need to I’m there for him. Akon’s part of the family too so this is what we do, we just make great music.” 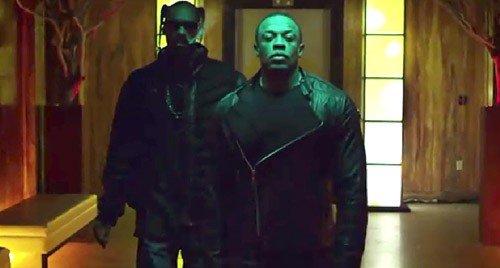 Dr. Dre has produced albums that together have sold more than 120 million units worldwide making him the most successful global music producer of our time.

He has won five Grammy awards including Producer of the Year in 2001. In 2008 Dr. Dre co-founded with Jimmy Iovine , Beats by Dr. Dre, the enormously successful high-performance headphone and sound transmission company.
www.drdre.com