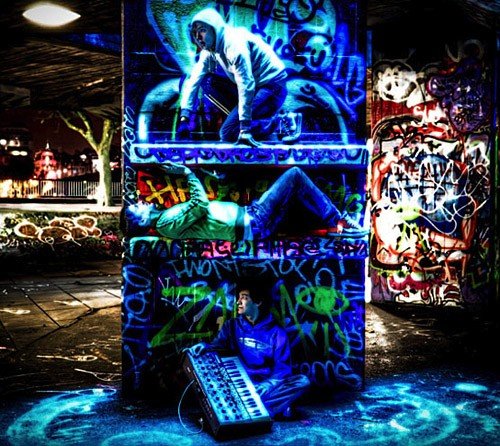 In 2010 brothers Joe and Dom Berditch together with guitarist Jonny Wharton formed the electronic live act Toxic Funk Berry with no small goal but to change the face of dance music…
After making it to the semi finals of Sky TV’s Must be the Music (losing out to an 11 year old harpist on the strength of a vitriolic and uncompromising live performance that had TV audiences leaping for their remotes) plans needed to be altered.

Abandoning their quick-route-to-fame for a more long-lived career path, the band decided on a name change and set about making a name for themselves with what they do best:

…playing high-energy, exciting and joyous live shows and writing filthy breaks… a mash up of well known samples into their own remix creations and pairing it all with their own songs they bridge the gap between Soulwax and The Prodigy.

Their stated aim is to “take back for humanity the music that once was subject to the tyranny of the computer and in so doing regain power over the machines that have made us their slaves for so long.”

‘We Make’ will be released as a digital single on November 28th via Feraltone / PIAS.
concretedisco.com
twitter.com/concretedisco