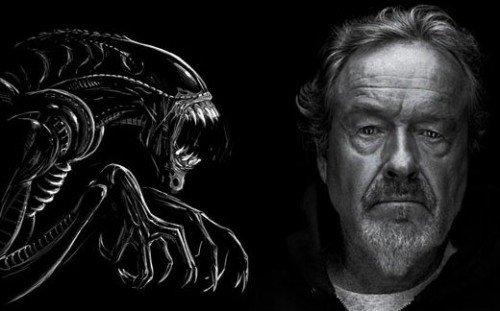 Ridley Scott, director of ‘Alien’ and ‘Blade Runner,’ returns to the genre he helped define.

With PROMETHEUS, he creates a groundbreaking mythology, in which a team of explorers discover a clue to the origins of mankind on Earth, leading them on a thrilling journey to the darkest corners of the universe.

There, they must fight a terrifying battle to save the future of the human race.

Visionary filmmaker Ridley Scott returns to the genre he helped define, creating an original science fiction epic set in the most dangerous corners of the universe.

The film takes a team of scientists and explorers on a thrilling journey that will test their physical and mental limits and strand them on a distant world, where they will discover the answers to our most profound questions and to life’s ultimate mystery.

Little is known about Prometheus’ plotline. But what we can share with you is that the film is set in space for the most part. Similar to that of “ALIEN”; the jumping off point to this project.

The film’s name “Prometheus” is that of the space vessel, used by a crew of select individuals who set off to explore and investigate fragments of “Alien DNA”.

The film itself revolves around the Space Jockey creature; as seen in the original film ALIEN (1979). When the team of scientists embark on this journey, they get stranded on an Alien world which tests their limits; both mental and physical.

Prometheus will be much more than just an Alien sci-fi horror. Ridley Scott is digging deeper for this project and Prometheus will unlock many questions and will touch on many aspects of life and existence. A true masterpiece.