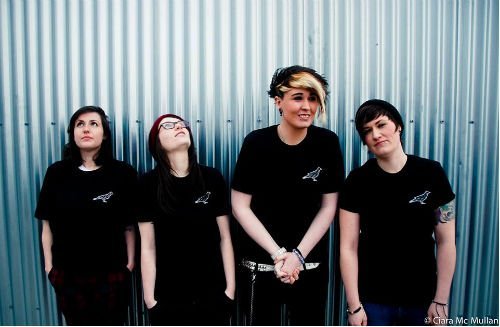 TWO Northern Ireland women have set up a clothing brand and label just for Tom Boys. And the duo say they hope to combat prejudice by giving their customers a place where they can buy “male fitting” clothing without fear of being judged.

Best Friends Samantha Nelson, 21, from Antrim and Kerilee Hunter, 24, from Belfast are also hoping to use their new clothing line Insolence to help raise funds for charities working in countries where prejudice against homosexuals is rife. 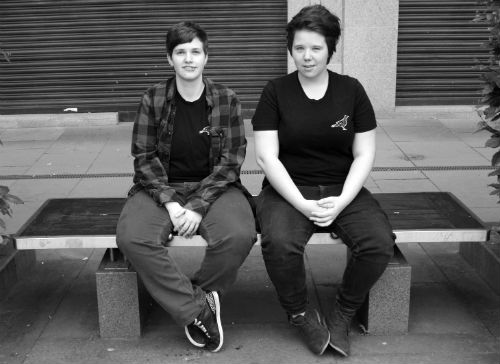 Samantha explained: “We wanted to launch this clothing company because we are tomboys ourselves, with the aim of making clothes for ladies, by ladies. The project started due to the fact a lot of girls I know wear lads clothes. Either due to the fact they are more comfortable, the designs are usually more tomboy fitting or the fact that they simply want to and shouldn’t have to deal with the prejudice that comes with buying male clothing.

“We wanted a brand that tomboys could be part of and get behind. One where they could wear the clothes, join the culture and feel good about wearing the type of clothing they prefer”

“The main big aims are to stop the crap that girls get when they to go buy clothes that are in the guys section. Giving them the option of shopping without the stares and comments of purchasing guys clothes. But for now we want to build a platform that tomboys can work from. And when someone asks ‘nice shirt is it a guys’ they can say, nope its a girls shirt and feel proud about being a tomboy styled female.” 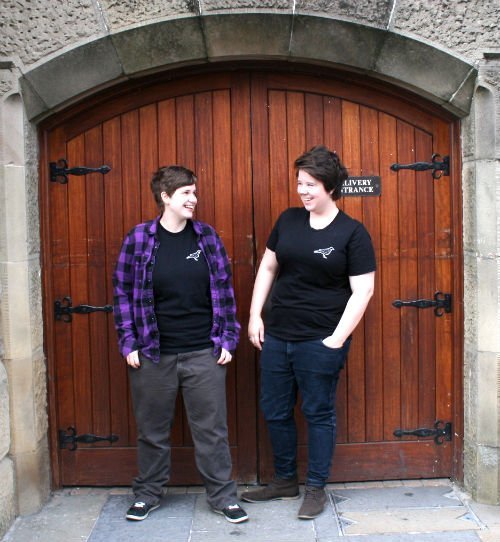 “Both myself and Kerilee from a young age have felt more comfortable in boyish if not actually boys clothes. Personally I found them more practical. Being able to run about, climb trees and be a kid. It wasn’t so much to do with style until I got older. I feel all style is a personal choice. I just think the men’s department gets a better deal when it comes to style and quality.”

Kerilee added: “Since I was young I only felt comfortable in men’s clothes. Friends and family would try and make me wear girls clothes but it just wasn’t me.”

“I kept asking why should I dress a particular way if it makes me uncomfortable. It’s ridiculous the pressure society can place on individuals to be a predefined way.”

Both Samantha and Kerilee are hoping their clothing brand will be more than just a fashion line and once launched they aim to use it to raise much needed cash for charity.

The pair have launched a Kickstarter campaign where they are raising funds to have their first batch of T-Shirt designs printed and ready for sale.

Samantha said: “We think most people who are gay have to face a struggle at sometime in their life whether it’s bullying or overcoming prejudice. Everyone’s on a journey and everyone will face a struggle.”

“The amount of people I know that have been bullied verbally and physically because of a dress sense or sexuality is disgusting. Society really needs to re adjust. It baffles me in all honesty why people feel that they have the right to an opinion on other peoples lives in the first place never mind a need to act negatively on it.

“The project was always more than just a clothing line. It started with the real need to have fitting comfortable tomboy styled clothes yet it grew from that. A lot of people assume that tomboys are lesbians. This is wrong. Completely. It’s a style choice.”

“I know many females that are tomboys in loving relationships with men. And at the same time many ‘feminine’ women that identify as gay. People are ill informed. They assume if a woman isn’t wearing a dress they must be a lesbian or if they have short hair. Stylistic choices have nothing to do with sexuality.”

“The brand then grew because women can’t simply buy men’s clothes without looks or remarks. This itself is wrong. These pre-defined society roles cause havoc. Some places get it harder than others. We both have strong beliefs that what has been and is happening in Russia regarding sexuality is wrong. Many countries for that matter. More than this women’s rights in general. We have lots of ideas for charity fundraising and we’re looking forward to getting it started.”

“We need to get the kickstarter funded and off the ground so we can then take on all the challenges we hope to overcome.”

Insolence was set up in November last year and Samantha and Kerilee are hoping the launch and Kickstarter campaign has helped to bring a positive spin to the word tomboy.

“Initially this started with a discussion of clothes and how much of a pain they are to find” said Samantha, adding: “We wished for a clothing range that would let the tomboy style shine. Then realized why don’t we give it a go ourselves.”

“I think the prejudice comes from the context. I use the word tomboy in a positive manner. A lot of people use it negatively. The users intent becomes the meaning of the word. A lot of people would use ladette in a negative way to describe a non ‘traditional’ not overly feminine woman.”

“This is the point of insolence. To empower these negative words. Take them and turn them into the power words they should be.”
If you would like to back Samantha and Kerilee’s Kickstarter campaign that will see Insolence clothing launched and sold in Belfast you can help by pledging your support via InsolenceKickstarter before Friday June 20.