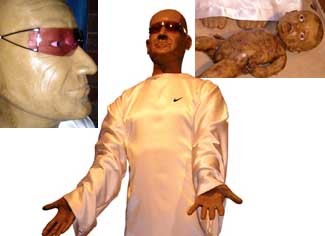 By Andrea Clarke
A DUTCH artist has unveiled a critical sculpture of Irish rock star Bonoâ€™s humanitarian work.
The piece, named â€˜Jesus Loves You Too (U2)â€™, depicts the U2 frontman in a Jesus-like pose, wearing Emporio Armani sunglasses and a long white robe with a Nike symbol.
At his feet is dying African infant but Bono looks straight ahead, disinterested, holding out his hands.
The controversial art work by artist, philosopher and historian Frans Smeets is the latest criticism of Bonoâ€™s activism, particularly his DATA (Debt, AIDS, Trade Africa) organisation and Product Red.
Founded by the singer and Bobby Shriver, DATAâ€™s Product Red initiative was designed to raise money for the Global Fund to fight AIDS, tuberculosis and malaria through its partner companies. Each company creates a product with the Product Red logo and in return for the opportunity to increase their own revenue through the Product Red products they sell, a percentage of the profit is given to the Global Fund.
But critics have slammed the campaign, claiming the project benefits the for-profit partners more than the charitable cause, with particular emphasis on the costly advertising. Product Red has been heavily criticised for not having an impact proportional to the advertising investment and being much less efficient than direct charitable contribution.
One critic Liam Fay, writer for the Sunday Times, said: â€Itâ€™s rarely mentioned now that Bono concentrates on international emergencies but there was a time when he also believed he had the answer to Irelandâ€™s domestic problemsâ€¦ But that answer has changed with comic frequencyâ€.