2009 has been the year of the fashionable synth bands who, for a while, gave us a little of what we needed. Uplifting tunes offered by acts etched on the right side of credible cool. However, there comes a time when a cry for substance-over-style rises up.

A time when people who like the pop-edged synth of yesteryear, crave the meat of guitars and the rhythmic joys of a full drum kit, when their music desires aren’t limited to the simply infectious but arms-in-the-air, soundtrack-of-our-lives anthemic. 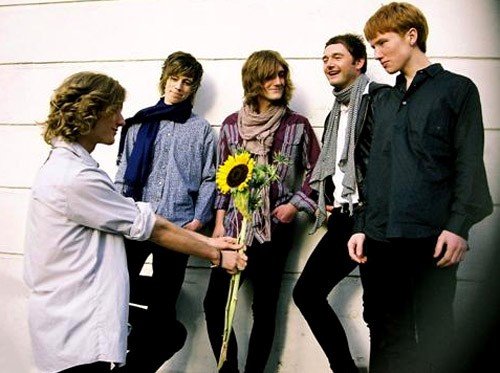 It appears new band NewIslands have arrived at the right time. On 15th March 2010 they release their debut single ‘Out of Time’ on new label YouWillBeFollowing. As anthemic as they come, ‘Out of Time’ on first listen is like an old favourite song you had forgotten you knew, yet simultaneously it’s like nothing you’ve heard before %u2013 all dreamy, swirling keyboards and yearning, building vocals.

Indicative of NewIslands desires to push music further and cross boundaries, ‘Out of Time’ comes with seven remixes including ones by Is Tropical, Breton and Active Child (as played by Radio 1’s Rob da Bank).

NewIslands Q & A
WHO ARE THE BAND MEMBERS AND WHAT DO EACH OF YOU DO IN THE BAND?
David Jones – singer
Luke Shoesmith – guitar/keys
Thomas Neal – Guitar
Bogart Giner – Bass
Raife Hacking – Drums

WHAT KIND OF MUSIC DO YOU MAKE / PLAY ?
(David) Well we’re huge fans of big epic tunes. We like the darker side of pop, and thats coming out more and more in our music. If we were to tag ourselves right now we’d probably say we make dark experimental pop music.

WHERE ARE YOU FROM ?
All of us are from the midlands apart from Bogart who’s from London.

HOW DID YOU GUYS GET TOGETHER AND WHEN?
(David) Me and Luke started writing stuff back in March last year. Originally we were just going to write a couple of demo’s, but we enjoyed the process a lot and so the band kind of fell into place over following few months.

WHO ARE YOUR INFLUENCES IN THE MUSIC INDUSTRY ?
(David) I don’t think we’re that influenced by the industry as such, bands wise we’re into loads of stuff but we agree on things like Depeche Mode, Pink Floyd, Echo and The Bunnymen, The Beatles, The Doors; bands who write great songs really.

WHAT HAS BEEN THE HARDEST PART OF BEING IN THE BAND FOR YOU ?
(David) Haha, if only you knew! Lets say it hasn’t exactly been easy. We’ve had near death experiences, equipment stolen, girlfriends being lost, lots of heartache…you know, standard fledgling band stuff.

TELL US A BIT ABOUT YOUR EARLY DAYS AND HOW THEY DIFFER FROM NOW ?
(David) MMM, its still pretty early days for us to be honest, I guess the early days it was only me and Luke, but now we have a full band, and we’ve evolved into something quite different to how it was when we first began. Now we are much more of a unit, which feels right.

WHAT WAS THE LAST GIG YOU PLAYED, WHAT DID YOU THINK OF IT ?
(Tom) The last gig we played was at Old Queens Head in Angel, London. The set-up was a bit strange, as we were on just after a canadian guitar prodigy, whose sound was pretty acoustic. It was alright though, really.

HAVE YOU ANY FORTHCOMING GIGS IN IRELAND OR NORTHERN IRELAND ? IF SO ARE YOU LOOKING FOR WARD TO THEM AND WHY ?
(TOM) We’d love to play Ireland, can you get us a gig?

DO ANY OF THE BAND HAVE ANY IRISH OR NORTHERN IRISH CONNECTIONS ? IF SO TELL US ABOUT THEM ?
(David) Well Tom our guitarist has red hair, and says he’s got a bit of Irish in him, and one of our girlfriends is from Belfast. She introduced us to the ‘Ulster Fry’, I think thats what its called?

WHATâ€™S THE MOST SUCCESSFUL THING YOU GUYS HAVE DONE TO DATE ?
(Tom) Well we’ve played some great support slots with the likes of Miike Snow, and we played Offset festival and In The City last year which was great. I guess releasing a single is a big achievement for us, and it feels like things are moving along nicely.

WHO HAS HELPED YOU THE MOST GET TO WHERE YOU ARE TODAY ?
(David) Our manager Federica has been great, and we have a great team around us. There’s been a lot of support for us, and we appreciate it all.

WHATâ€™S COMING NEXT FOR THE BAND ?
(Tome & David) Well we have our single launch on March 11th in London which is going to be wicked and a single launch on March 19th in Northampton We’ve got a few of our friends DJing and playing live for us, and its going to be a great way to celebrate releasing our debut single. After that we intend to play a few more shows and work on some new material and prepare our next single. Its looking pretty busy for us in the near future.

IS IT HARD BEING A NEW BAND IN TODAYâ€™S INDUSTRY ?
(David) I think you have to work harder to prove your worth. Not as many people are getting signed straight away, but that can be a good thing. It allows bands to develop a bit, and sorts the wheat from the chaff so to speak.

HOW IMPORTANT IS THE INTERNET AND SOCIAL NETWORK SITES TO THE SUCCESS OF YOUR BAND ?
(David) Sites like facebook and twitter are good to make people aware of what your doing as a band, and invite people to gigs etc. We also have a blog (www.newislands.wordpress.com) that we regularly update. This gives us a chance to talk about what we’re into and what we’re up to. We like to keep our cards quite close to our chest though, don’t want to give everything away.

QUICK-FIRE QUESTIONS:
– WHOâ€™S THE MESSIEST IN THE BAND? (David) The rest of the guys would probably say me on this one .
– WHO IS HARDEST TO LIVE WITH ON TOUR? (David) Me again!
– WHO IS THE JOKER AND WHY ?
(David) There’s a couple of jokers in the band, Tom and Raife tend to keep everyone on their toes with their gags.
– WHO MOANS THE MOST ? (David) I couldn’t possibly say. We all moan to be fair, but probably Luke haha.
– WHO IS THE MOST ROCK â€˜Nâ€™ ROLL & WHY ? (Tom) Bogart loves a good party, or even a shit one.
– WHO IS THE LOUDEST ? (David) That’ll be me then.
– WHO IS THE MOST ANNOYING ? (David) See above
– WHATâ€™S THE MOST EMBARRASSING THING SOMEONE IN THE BAND HAS DONE ?
(Tom) Can’t think of a specific occasion, but its probably Raife.

WHO WOULD YOU MOST LIKE TO COLLABORATE WITH IN THE INDUSTRY ?
(David) We respect people like Damon Albarn, Martin Gore (Depeche Mode), new bands wise, The Big Pink and Animal Collective are great.


WHO WOULD YOU MOST LIKE TO COLLABORATE WITH IN IRELAND OR NORTHERN IRELAND AND WHY ?
(Tom & David) Definitely like to have a jam with The Pogues. It would also be amazing to get Sinead O Connor singing on one of our tracks. Tom went to Dublin and saw a few traditional Irish folk bands, getting involved in something like that would be interesting.
www.myspace.com/newislands
www.youwillbefollowing.co.uk
NEWISLANDS
‘Out of Time/ Crosstown Feel’-the debut single out 15th March
YouWillBeFollowing Records
UK Spring tour dates
11th March- Carnivale, London
12th March- Jack Daniels Lounge- Roof Gardens, London
19th March- Labour Club, Northampton 2nd April- The Roadmender, Northampton
14th April- Proud Galleries, London