Casxioâ€™s Refreshing Divine Fusion Of Disco, Funk And Rock nâ€™ Roll from the sunny shores of Los Angeles with their unique brand of upbeat disco funk. 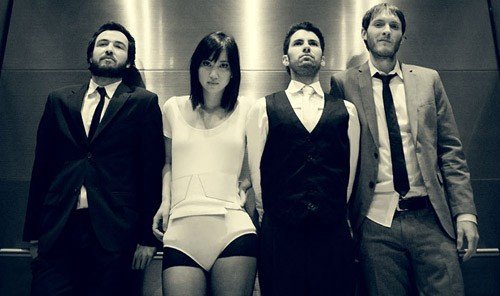 www.myspace.com/casxio
Casxio Q&A with LUCAS GUERIN:
WHO ARE THE BAND MEMBERS AND WHAT DO EACH OF YOU DO IN THE BAND?
Andrea Choe: keyboards, Eric Saez: Guitar/backup vocals, Zach Schrock: Drums, Lucas Guerin: Bass/Lead vocals

WHERE ARE YOU FROM ?
We hail from Los Angeles, CA.

HOW DID YOU GUYS GET TOGETHER AND WHEN?
www.jdate.com about 3 years ago.

WHO ARE YOUR INFLUENCES IN THE MUSIC INDUSTRY ?
David Bowie, Laurie Anderson, Michael and the Merry Men, Jordman and the Early Signs.

WHAT HAS BEEN THE HARDEST PART OF BEING IN THE BAND FOR YOU ?
Putting it all on the line can be difficult at times. And writer’s block.

WHAT WAS THE LAST GIG YOU PLAYED, WHAT DID YOU THINK OF IT ?
The last gig we played was at Bardot in Hollywood. We always enjoy playing there. It’s a tight space and the band plays at ground level which makes for an intimate performance. Also the sound and lighting people are pro. The overall ambiance of the room is rich with class which I find rare at high-end hollywood clubs. Most of them wreak of the semblance of class with the overwhelming stench of prostitution.

HAVE YOU ANY FORTHCOMING GIGS IN IRELAND OR NORTHERN IRELAND ? IF SO ARE YOU LOOKING FOR WARD TO THEM AND WHY ?
We hope to make it out to Ireland within the next few months. Nothing is set in stone as of yet, but we are very excited at the prospect.

DO ANY OF THE BAND HAVE ANY IRISH OR NORTHERN IRISH CONNECTIONS ? IF SO TELL US ABOUT THEM ?
I have a very good friend, Catriona White, from Tipperary. She’s the bee’s knees.

WHATâ€™S THE MOST SUCCESSFUL THING YOU GUYS HAVE DONE TO DATE ?
Our performances have been a staple in our success thus far. We recently finished our first album and are excited to see what comes from it.

WHO HAS HELPED YOU THE MOST GET TO WHERE YOU ARE TODAY ?
Our manager, Michael Merriman.

WHATâ€™S COMING NEXT FOR THE BAND ?
Just completed our first full length album so we are now considering offers from record labels. Jaysus, doesn’t that sound backward, finish the album then get signed?

IS IT HARD BEING A NEW BAND IN TODAYâ€™S INDUSTRY ?
Nope. I’m assuming it’s always been a challenge in one way or another. We bitch and complain about the state of the industry these days but there always has and always will be something to bitch about because the industry, along with the universe, is in a constant state of change.

HOW IMPORTANT IS THE INTERNET AND SOCIAL NETWORK SITES TO THE SUCCESS OF YOUR BAND ?
That’s like asking a band from the 80’s how important radio was to their success. It’s the status quo of promotion. If you don’t have a myspace or facebook profile you might as well shoot yourself in the foot. It’s all about how you use it and not fighting it. I still have trouble accepting this. But like I said, status quo.

QUICK-FIRE QUESTIONS:
– WHOâ€™S THE MESSIEST IN THE BAND?
me probably. lucas.
– WHO IS HARDEST TO LIVE WITH ON TOUR?
To be fair, I’d have to say we all have our moments.
– WHO IS THE JOKER AND WHY ?
Zach. He’s got the zaniest sense of humor and it comes out like tourette’s.
– WHO MOANS THE MOST ?
guilty.
– WHO IS THE MOST ROCK â€˜Nâ€™ ROLL & WHY ?
hmmm. I would have to say I live the most rock ‘n’ roll lifestyle. Because I’m 2 months behind on rent. Is that rock ‘n’ roll?
– WHO IS THE LOUDEST ?
Zach. Tourette’s.
– WHO IS THE MOST ANNOYING ?
zach. Tourette’s.
– WHATâ€™S THE MOST EMBARRASSING THING SOMEONE IN THE BAND HAS DONE ?
Dressed up as a girl.
– WHO WOULD YOU MOST LIKE TO COLLABORATE WITH IN THE INDUSTRY ?
Nigel Godrich.
Interview by Â©FAME Inc
www.fameinc.co.uk