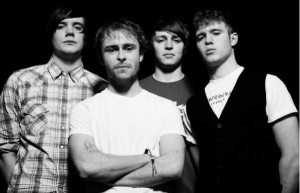 Combining a large range of influences to create a sound that is unique to themselves.

Nephu Huzzband bring together elements of Indie, Post-Hardcore, Screamo, Art-Rock, New wave, Old School Emo and Punk to create a fresh sound that many people struggle to classify, most agree on the quality thoughâ€¦

In what promises to be a breakthrough year for the band , they have already been nominated for Best Live Album of 2008 at the inaugural Music Producers Guild Awards for the bands debut album ‘Live in London’

The video also featured on MTV2. Should Have Used and Abacus was featured on Tom Robinsons BBC 6 show and the band played an exclusive set for Fly TV in 2008. The video to the single also appeared on NME tv and a 30 min documentary on the band will be aired on national TV in late 2008. Their remarkable year was confirmed when the band were selected for an exclusive BBC 6 interview with Tom Robinson at the prestigious In The City festival in Manchester.

In the past they have been described as sounding like bands as diverse as Fugazi to Klaxons. The Nephu Huzzband bandwagon is filling fast with supporters also including Room Thirteen, who said â€œThere’s no other word for it. Progressive. Nephu Huzzband combine so many influences that they actually manage to sound unique.â€

Gigging to increasingly receptive crowds, including recent performances with The Victorian English Gentlemens Club, Die! Die! Die!, Notekillers, Fear of Flying, Operator please and CafÃ© de Paris to name a few. Nephu Huzzband create the most unique, vibrant and staccato you ever likely to witness.

A full UK tour will be announced soon.