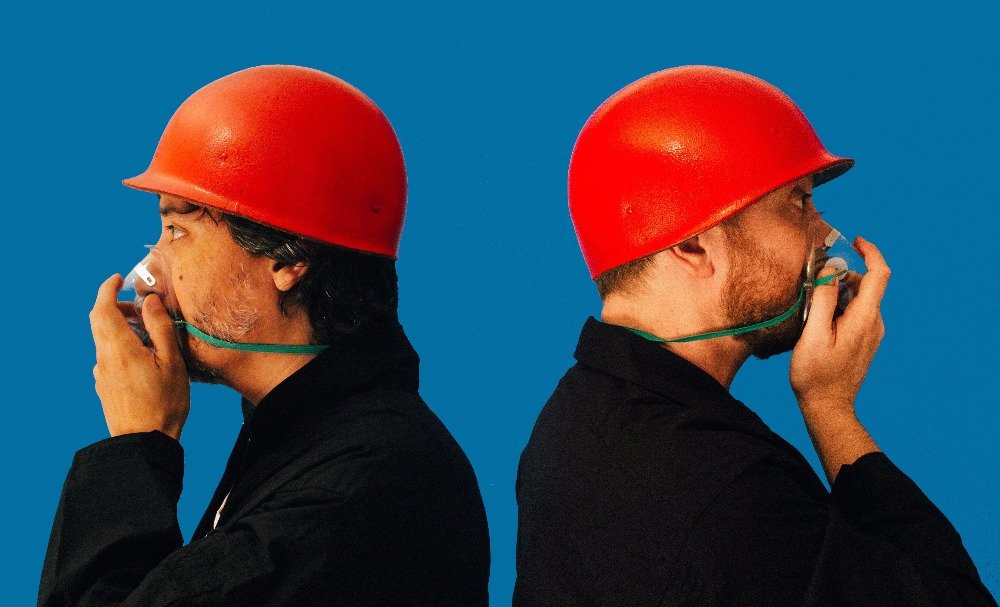 LA based glitch-pop outfit nav/attack – led by Andrew Lynch with drummer Jason Echeverría – open up about last year’s EP ‘Errrors’, their rather intriguing dystopian themed single ‘Centipede’ (out now via Sparse Symmetrics) and they ask…”There’s still a music industry?”.

Hi Andrew Lynch, how are you today?

What’s your new single ‘Centipede’ all about?

Last summer I wrote a film script that takes place in the future. One of the characters in it is a woman in her 50’s who is incarcerated in her own home, awaiting execution. “Centipede” is a trip through her head, feeling somewhat self-aware, but also very confused.

And how would you say it differs from your last EP ‘Errrors’?

On “ERRRORS” there was a sense of humor about it, and stylistically we used almost no live drums, going for beats and trip hop instead. With “Centipede” and the rest of the album that is coming soon, the story elements we’re using are heavier (death row, technocracy, addiction) so we’re pushing for more aggressive sounds. And a big drum kit on everything.

You’ve been in other bands in the past, but what was it that inspired this latest musical project?

I’ve loved films since I was a kid, especially sci-fi, and then later in life I went to art school to study film-making. I just had this idea that I wanted to combine music and film. I want to tell stories within the songs that refer to larger, cinematic ideas. And so far they have all been moderately sci-fi. For the first record, I directed a short film of six interlocking music videos and we hope to keep that process going with this one.

Who would you say are you biggest influences musically?

My favorite artists are innovators—David Bowie, Miles Davis, Radiohead. Their music surprises people and usually seemed to be from the future somewhere. Also, they all eventually ended up combining acoustic and electronic music in a really interesting way. I feel like that’s a big part of what we’re trying to do.

How does the songwriting work in the band?

We love drum beats, fake or real. We start everything with some kind of drum pulse. And then I don’t know after that. Just kidding. Actually, it does vary a lot. Sometimes it’s a bass idea, or maybe I already have some piano chords. I do write on piano a lot and then end up replacing those tracks with synths sometimes. And then if there isn’t already acoustic drums we’ll record those over the drum machine(s).

There’s still a music industry? Sorry. Someone recently said our songs sound like a catastrophic blizzard hits L.A. and then the whole city becomes a glacier, which seems accurate to me. In terms of where it fits in the music industry though…I guess I mostly try to leave that up to people that are more objective than I am. I mean, I don’t want to exclude anyone so I try to think of it less in terms of genre or whatever and just take it globally. One of the cool things about Spotify is you can log in and see from where people are streaming and what are their ages…soon you can probably know the brand of their favorite breakfast cereals. Anyway, it’s been cool to see how our sound appeals to a diverse group of people from different continents.

For those who haven’t seen you play live, what can people expect from your live performances?

Energy. Costumes. Videos. The goal is always to make the experience as immersive as possible, which is why I put on a get-up of some kind for every show, and it’s usually tied into the themes we’re talking about in the videos and the lyrics.

Finally, what does the rest of 2017 have in store for nav/attack?

We’re just finishing mixing our third full-length album, then we will be spending the end of the year rehearsing all the new material and playing some live shows here in California as well as a few really cool events I can’t talk about yet because we’re still in the planning stages.