There was plenty of Glee in Hollywood where the TV show about a song-filled high school walked away with all the TV comedy awards at the Golden Globes â€“ the first major awards ceremony of the year. 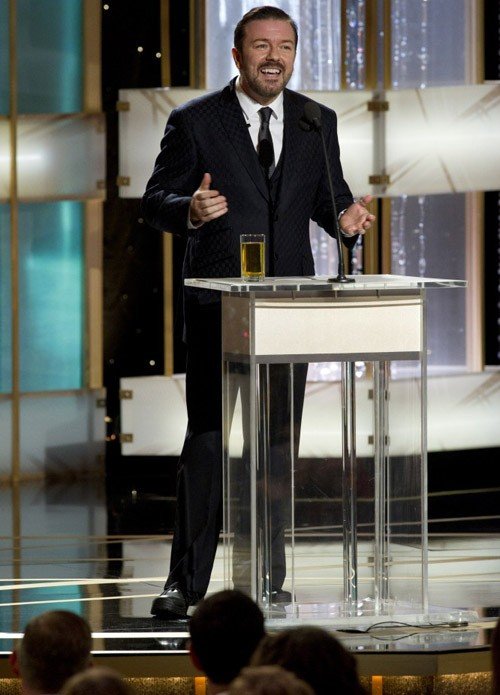 The British comedian and creator of The Office, Ricky Gervais, hosted an evening of glitz and glamour for a second successive year, opening with a nod to the increasing number of 3D films, and suggesting that the only film of the past year without 3D characters was The Tourist.

This raised the question of how the film got three nominations â€“ was it because the members of the Hollywood Foreign Press Association just wanted to spend the evening with Angelina Jolie and Johnny Depp. It certainly couldnâ€™t be the fabled bribes, he suggested, because who would see tickets to a Cher concert as a bribe. â€œItâ€™s not 1975,â€ he quipped.

After a digging his comedic claws into more of Hollywoodâ€™s favorites, the evening launched with Christian Bale taking the Best Supporting Actor trophy for playing the drug-addicted brother of boxing champion Micky Ward in The Fighter. The film also picked up the prize for best supporting actress: Melissa Leo played the mother of the pair. 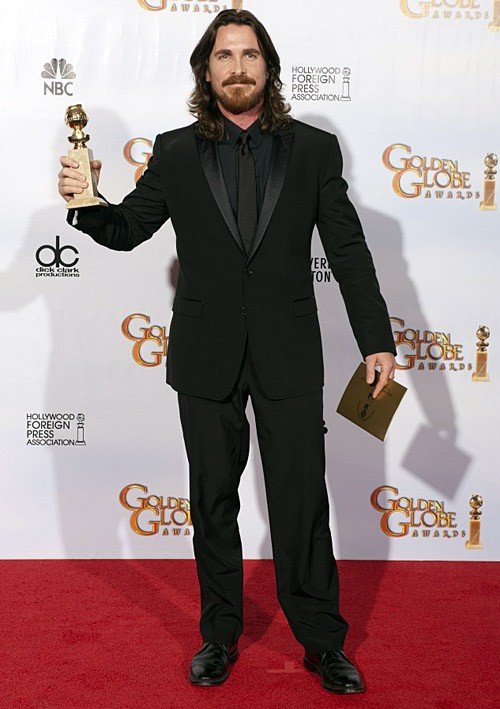 The top acting prizes went to Colin Firth for playing King George VI in the drama, The Kingâ€™s Speech, Natalie Portman for the ballet drama Black Swan, Paul Giamatti for the comedy Barneyâ€™s Version and Annette Bening for the lesbian comedy The Kids Are All Right, which also took the prize for best comedy. 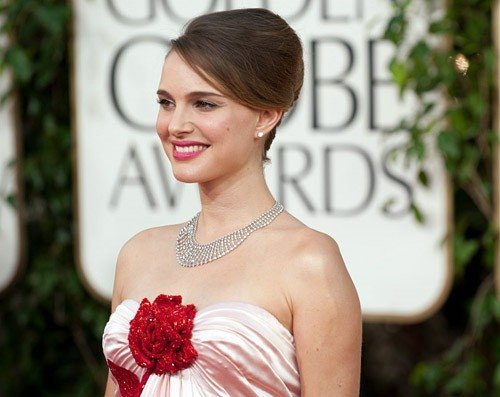 Best Drama went to The Social Network, which also took the prizes for best director, for David Fincher. Aaron Sorkinâ€™s screenplay for the same film also won him a Golden Globe.

The HFPAâ€™s annual awards ceremony also honors the best achievement in television, where, as in the film categories, the main prizes are handed separately to dramas and comedies. 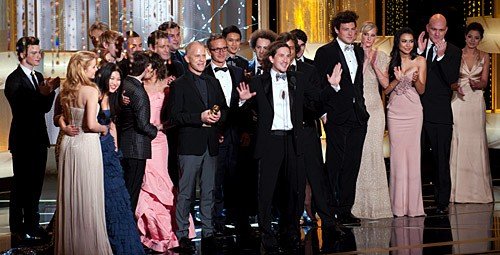 The best actress in a comedy series was Laura Linney, the star of The Big C. And Jim Parsons, from Big Bang Theory, was awarded the Golden Globe for best actor in a TV comedy.

Bridging the gap between television and films are categories for miniseries and TV movies. Olivier Assayasâ€™ biopic of the terrorist Carlos the Jackal, Carlos, won the main prize in this category, with Al Pacino taking the Golden Globe for best actor in a miniseries or TV movie for playing another real-life character, the euthanasia doctor Jack Kevorkian, in the TV movie You

Donâ€™t Know Jack. The best actress in this category went to Claire Danes for her portrayal of another real person, the Autistic Author-scientist Temple Grandin.

Other awards included Toy Story 3 for Best Animated Feature, the Danish film In A Better World took the Best Foreign Language Film, Cherâ€™s song You Havenâ€™t Seen The Last of Me was the Best Song, for Burlesque, and Trent Reznor and Atticus Rossâ€™s score for The Social Network also earned them a Golden Globe.

The Golden Globe Awards ceremony is the biggest and most glamorous event in Hollywood calendar. The awards are considered by the industry as the best indicators for next monthâ€™s Oscars.

In their speeches, tonightâ€™s winners expressed their gratitude, to their collaborator, but mainly to Hollywood Foreign Press Association (HFPA) for recognizing their work and their talent.

The Golden Globe awards are voted for by the 83 HFPA members, who also organize the ceremony and co produce the show with The Dick Clark Productions. More than 19 million viewers tuned in to watch the show last year on NBC, and many expect this number to be even higher this year.

Earlier, more than 200 stars from Hollywood and beyond marched along the red carpet, dressed in their finest gowns and dripping with diamond and other jewelery, as they were showered by cameras flashes and their names were shouted by the screaming fans.

Surrounded by so many of their peers, the stars seemed to be at ease, loitering around the ballroom or sipping drinks in the outdoor bar and chatting with colleagues and friends. In fact, the Golden Globe ceremony is one of those rare events where one would bumps into stars more than into mortals.

Right after the ceremony, six parties, held by different studios, kicked off in different venues inside the Beverly Hilton hotel, honoring their nominees and last nightâ€™s winners.

The ceremony was over but the party had just started. The Golden Globe event is indeed the best party in town.
www.goldenglobes.org