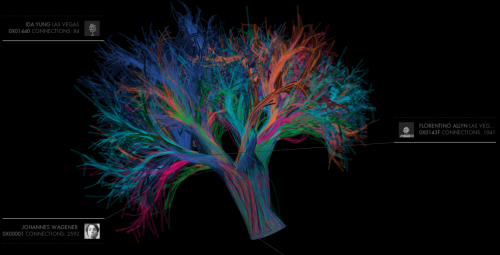 Super Rock band Muse launched a web application named The Social Connectome (an innovative Google Chrome project), which allows people to add themselves to a visual network of Muse fans and unlock a new song from their upcoming album The 2ND LAW.
In homage to the Human Connectome Project, Muse are attempting to map the journey and connections of every fan who joins the project and re-create the vast web of data that makes up their new sleeve image.

The band will release THE 2ND LAW on Helium 3 / Warner Records on October 1st.

The album release will be followed by a huge tour of Europe starting in France on October 16 and including five UK shows. The UK dates start in Glasgow on October 24 and include two nights at London’s O2 Arena, one night in Birmingham, one in Manchester and one at The O2, Dublin.

On the making of their new album, bass player Chris Wolstenholme says: “We all had a lot of great fun doing it,” “and hopefully you can hear that on the album.

There are some real moments of positivity in the songs. And I just think everyone personally is in a pretty good place at the moment.”

“It feels like the best thing we’ve ever done,” says drummer Dom Howard. “There was a sense of adventure making it.”

“This was a breeze!” declares Bellamy, still high from the experience of seeing rock-operatic new track Survival emerge victorious as the official anthem for the London 2012 Olympics.