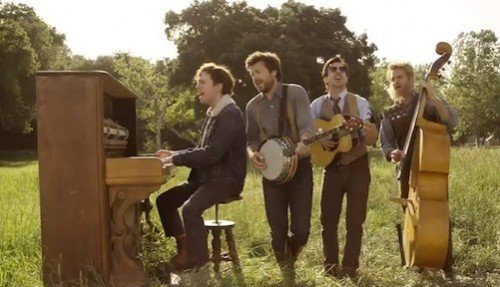 This time the band step aside and allow four impersonators to offer their take on the band’s new track, released on 16th September via Gentlemen of the Road/Island Records.

The band say: “We are delighted to present to you our new video for the song Hopeless Wanderer. A massive pair of thumbs-up to Sam Jones for directing and his cast of young budding actors. We’re sure they all have bright futures ahead of them”

Ben Lovett impersonator Ed Helms summed-up the experience: “We had an absolute blast shooting this video and the final product only confirms what I felt going in – thank god we’re a fake band.”

“We’re so grateful to be a successful fake band. It’s been years of fake dedication and fake hard work to get here, and I really believe we are at the forefront of abject fraudulence.”

Winston Marshall’s stand-in, Jason Bateman, concluded: “Getting a chance to pretend I’m a rock star was the proudest I’ve been of myself while awake.”