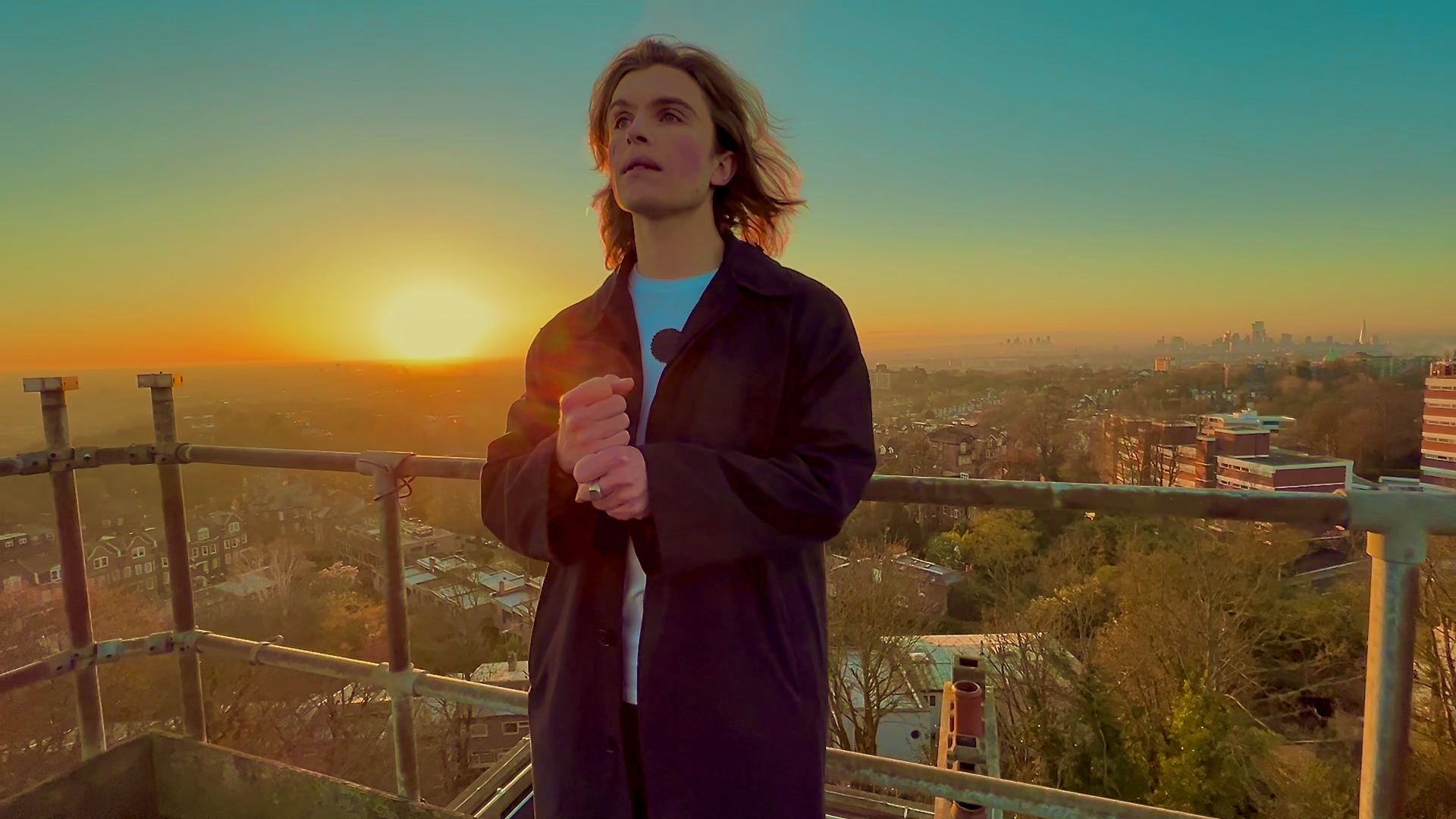 "I think Oklou might be the most talented pop-writer I’ve heard. Her album Galore has been on repeat for me."

Electronic pop artist Eliot Allison recently made his solo debut with the idiosyncratic single “Hey“. Pondering the mysteries and seeming chaos of romantic relationships, he has applied the language of sign in its accompanying music video to access another dimension of communication and to convey meaning in an alternatively visual way.

The multitalented artist has honed his craft over the years by playing in orchestras, and indie bands and working as a composer and musician with Theatre companies. He has also had art exhibitions in London, Berlin, and China, holding an MA from the Royal College of Art, London, and is part of a filmmaking collective alongside his mum.

Eliot describes himself as an artist who embraces all media, constantly seeking the best route possible to intimate artistic communication. In an age of social distance, “Hey” is his attempt to dislodge what is rigid and delve into the unfamiliar. As he explains:

“Hey is a sign that explores the chaos and unknown mystics of heartbreak. I spent time learning British sign language to try and crack open the lyrics a bit more – I guess as a way to express that we are as much a mystery to ourselves as we are to other people. I also used it in a music video which I directed with some new friends, dialling into the renewed narratives of commedia dell’arte – Pierrot (or Pedrolino) in particular. It feels like a start.”

The whole release is written and recorded in a home studio in Archway, London, while the video was filmed on a balcony at 5 am to catch the colours of the sunrise over the city. Make sure to watch the video for “Hey” and check out Eliot’s selection of his top influences and what he loves about each of them, below.

Have been listening to this guy for what feels like forever. 7G and Apple were huge albums for me – songs ‘Being Harsh’ and ‘Silver’ in particular, but ‘Beautiful’ is always my peak of the night tune. So much respect for what he’s done in bringing together computer musicians and breaking boundaries in pop and dance music. Plus his work with Sophie, Danny L Harle etc. Soundtrack of a million good nights.

I think Oklou might be the most talented pop-writer I’ve heard. Her album Galore has been on repeat for me, but tunes like SGSY are also just so well glued together. You can tell she has deep currents – her songs seem to grow instead of play. Love love love love the pathos in this song too…

‘Concorde Moments’… this song is the most settled of theirs for me – seems to sit at the border between being a love song and a schizo-self analysis – maybe it’s both? A love song for the self? Idk. Just lucky to know this crazy talented bunch.

Probably my most played tune on here. Just obsessed with Cole’s honesty and the journey he’s not afraid to share. Always felt Diiv are a pretty fearless band and they’ve always given me hope when I’ve been through the mill. Love the vid too – I’m a surfer boy at heart…!

Pfft… I mean literally what can you say about C.P.? I didn’t know which song to choose but I guess metaphorically Door represents what I felt when I started listening to Caroline Polachek… something opened up and I can’t go back.