Viacom Inc. announced that Belfast, will play host to the 2011 MTV EMAs. 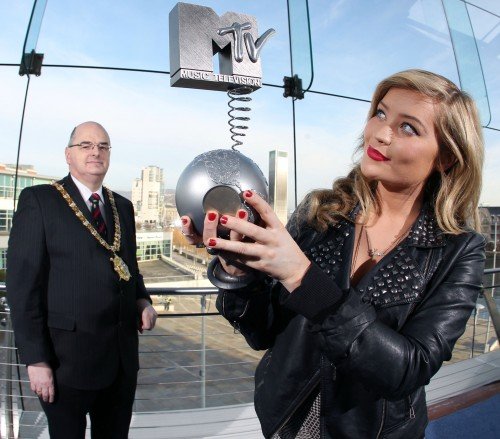 Packed with unprecedented performances and appearances, the 2011 MTV EMAs will broadcast live from Belfastâ€™s renowned Odyssey Arena in early November 2011

“Belfastâ€™s vibrant nightlife and compelling music scene, known for fostering emerging artists and turning out international chart toppers, provides the perfect backdrop for one of the worldâ€™s biggest nights in music.

The spirit of Belfast combined with our expertise is the perfect foundation for an unforgettable event and unique night,â€ commented Antonio Campo Dallâ€™Orto, Executive Vice President of Music Brands, VIMN.

David Lynn, Executive Vice President and Managing Director, VIMN UK & Ireland
added: â€œHosting the 2011 MTV EMAs in the UK is a tremendous opportunity to showcase the UK across a globe spanning portfolio of TV networks and websites serving in excess of 160 countries, while reinforcing our commitment to production in the UK. We greatly appreciate the support of the Belfast City Council and the Northern Ireland Tourist Board and look forward to delivering an outstanding line up of events that capture the beauty and essence of Belfast.â€

The Lord Mayor of Belfast, Councillor Pat Convery, said: “It is fitting that the EMAs are coming to Belfast – one of Europe’s most exciting and vibrant cities and with around 35 per cent of our population below the age of 25. Belfast has a rich musical history and has produced artists such as Snow Patrol and the legendary Van Morrison and we now have an unprecedented opportunity to shine a spotlight on our musical heritage while also providing a major boost to our economy.â€

“I am delighted that MTV has chosen Belfast. The decision to host such a world class event in our city is an endorsement of what we have been saying for some time now – Belfast is a happening place.”

Tourism Minister Arlene Foster welcomed MTV to Northern Ireland and said: â€œPlaying host city for the MTV EMAs is a huge coup, not only for Belfast, but for the whole of Northern Ireland. We are thrilled that Belfast will join the elite club of other leading European cities which have hosted these prestigious music awards.â€

â€œHosting the MTV EMAs will surely elevate Northern Irelandâ€™s profile on the international stage. I hope those who come to Northern Ireland for this spectacular event are inspired to explore more of what we have to offer for themselves,â€ she added.â€

MTV also announced plans to host a series of local events around Belfast in the lead up to the EMAs.