Continuing their strong link to all things local, Across The Line presents a showcase of three of NIâ€™s most exciting new musical prospects, in association with The Stiff Kitten.
The last three years has seen them play shows with the likes of Reuben, Biffy Clyro, Million Dead, Seafood, YCNI:M and Future Of The Left, racking up hundreds of miles and honing their live show into a ferocious explosion in the process. Fighting With Wire emerged from the ever creative Northern Ireland music scene in 2003, the brainchild of guitarist Cahir Oâ€™Doherty (Jetplane Landing / Clearshot) and drummer Craig McKean (Clearshot). An idealistic bunch, theyâ€™ve since done what rock bands are meant to do: they wrote a bunch of songs, and took to the road. 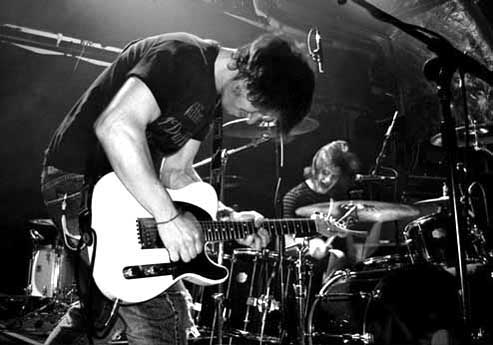 After putting out a number of limited edition DIY singles, they took a breather at the end of 2006 and finally started work on their longawaited debut album. Recorded in Northern Ireland and finally completed in mid-2007, Man Vs Monster is a dynamic beast of a record â€“ raging out of your speakers one moment yet gentle and intricate the next, and all without losing focus of whatâ€™s important: the song. Atlantic Records stepped into the breach in March of this year to pen a deal for the International release of their debut LP, with MTV2 and Zane Lowe singing the band’s praises.

Local rockers General Fiasco are currently the talk of every industry office in London. Formed just last year, their blend of rock and alternative is as fresh as it is exciting, and the band are set to make huge waves across the UK this year. They already have support slots under their belt with The Wombats, The Hold Steady and many more.

Skruff have been constantly playing the live circuit and releasing numerous E.Ps, including their 6 track â€œHot Robot,â€ which proved to be something special having helped secure their large and dedicated fan base. With the release of there latest 5 track E.P “Naked Us” it has already proved to be there most successful record to date gaining them wider acclaim and radio play throughout Ireland and England by DJ’s such as Tom Ravenscroft for Channel 4 radio and George Lamb for BBC Radio 6, and Rory Mc Connell of Radio1 N.Ireland. Having supported Shaun Ryder of The Happy Mondays, The Twang, The Rumble Strips and most recently The Enemy, Skruff continue to impress music lovers further a field.
The Stiff Kitten, in association with ATL, presents:
FIGHTING WITH WIRE
GENERAL FIASCO & SKRUFF
THE STIFF KITTEN
WEDNESDAY 16TH JULY
930PM / Â£3 ENTRY