After 4 months in private beta, Moshi Monsters opened up to everyone for free on April 16th at moshimonsters.com

Players adopt their own Monster and keep it happy by solving the daily puzzles that it sends them. Monster owners can interact with their pets in a wide variety of ways such as tickling, playing games, shopping, designing
their rooms, and dressing up (coming soon). One of the core elements of Moshi Monsters is the emotional bond created between the user and their Monster which is achieved through sophisticated flash animations and a complex behavioural engine. Over time the Monsters develop their own unique personalities depending on how well, or badly, they’ve been treated. 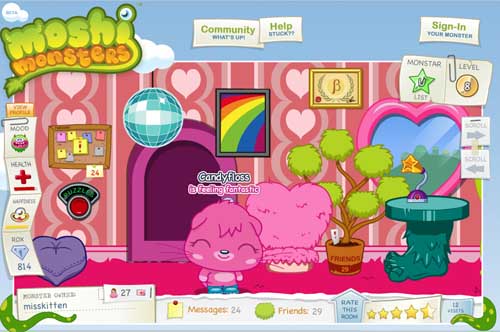 There are many ways players can connect and communicate with others such as the Friends tree, visiting other Monster’s rooms, and leaving customised Pinboard messages. During development, child safety online has been kept at the forefront of the Moshi experience.

The more attention a Monster gets from its owner and their friends, the higher its Monstar status rises. All Monsters start as Z-Listers and can rise through the ranks to become A-List Monstars.

Moshi Monsters is played in the browser and requires no download. The game is free to play, although a subscription feature for premium elements will launch in the future, as well a range of offline products.

Michael Acton Smith, CEO of Mind Candy said, “Playing games and chatting to friends are two of the most popular activities for children online. Moshi Monsters provides these experiences in a safe environment while also helping children learn through the puzzle games and educational elements”.