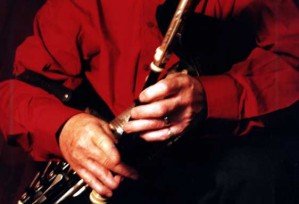 The ‘Mosaic of Support’ is the brainchild of Francis McPeake IV and has been created to encourage musicians, businesses and music lovers across the globe to become a supporter of the school by purchasing a tile within the Mosaic to keep the dream of learning traditional music alive.

An integral part of Belfast’s musical culture, the school of excellence has provided thousands of pupils with traditional music tuition in its 32 year history and the ‘Mosaic of Support’ will raise funds to take the school forward.

Attending the official launch of the campaign in The Merchant Hotel, Belfast, The Lord Mayor of Belfast, Councillor Naomi Long, said: “I admire the creative approach the four generations of the McPeake family have dedicated to nurturing musical talent in Belfast. I welcome the innovative ‘Mosaic of Support’ campaign they have developed to fund the school into the future.”

Speaking about the campaign, Michael Flatley, stated: “I wish The Francis McPeake School of Music the very best of luck. Music is a very important part of life, not just when we’re young but it’s also invaluable as we get older.”

According to Bill Wolsey, owner of the most public houses in Ireland’s history, “The McPeakes have taught all classes and creeds for four
generations in Belfast. They have taught through good and bad times, through times of trouble and times of peace. To me, The McPeakes represent everything that is good about Ireland in general and Belfast in particular they have always extended the hand of friendship!”

Francis McPeake IV said: “The support we have received for the school to date has been phenomenal and the great thing about this campaign is that via the internet, people can support us globally and, with the click of a mouse, see the people, businesses and artists who have endorsed us by purchasing a piece of the ‘Mosaic of Support’. Each supporter receives a tile on the virtual mosaic which will eventually form a piece of artwork created by award winning designer Jake Tilson.

“And that’s not all, since the McPeake ethos is that everyone can make music, this has inspired a new musical composition entitled ‘Jam Piece’ and we are encouraging all our supporters to record a note which will be incorporated into this new score.

“A documentary charting the school’s history is also being filmed and I hope that as many supporters as possible will record their note for ‘Jam Piece’ to feature within the documentary.”

Join the ‘Mosaic of Support’ by simply logging onto www.francismcpeake.com