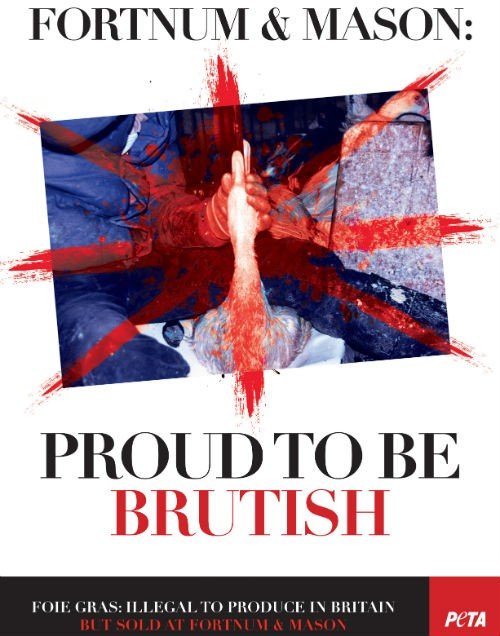 A new PETA ad highlighting the cruelty behind every tin of foie gras sold by Fortnum & Mason will be funded entirely by Channel 4 after the broadcaster used a song by The Smiths in advertisements for Gordon Ramsay’s Christmas Cookalong Live back in 2011 and without the singer’s permission.

Not wanting “Please, Please, Please Let Me Get What I Want” used to advertise a programme that promoted a chef who uses foie gras despite PETA’s overture to him to at least reject this bizarre, cruelly produced food, Morrissey sent his legal team into action.

PETA has received £10,000, which the group will use to buy ad space for its brand-new ad campaign, slamming the store for selling what is banned from being produced in the UK and titled, “Fortnum & Mason: Proud to Be Brutish”.

Morrissey says: “Ramsay may very well stick his head in his microwave when he hears that the money I received from Channel 4 because one of my songs was used to promote his Christmas show is being donated to PETA to fight foie gras. Foie gras is so cruelly produced that he’d be against it if he had an ethical bone in his body.”

Foie gras is illegal to produce in the UK, and many chefs, including Mark Hix and Albert Roux, and department stores – including Selfridges, Harvey Nichols and House of Fraser – refuse to serve or sell it, as does every major supermarket in the UK, along with the BAFTAs, Lord’s Cricket Ground, the Royal Shakespeare Company and many, many more.

Fortnum & Mason is one of the few retailers that still profits from this “torture in a tin” and was the recent recipient of PETA’s first Cruellest Retailer Award for shamefully clinging to sales of foie gras, despite being presented with graphic evidence of abuse on farms that supply foie gras to the store.