The most groove-oriented act in the mid-’90s female-fronted electronica crowd, Morcheeba relies on the sweet, fluid vocals of Skye Edwards and a laid-back mix of fusion, funk, and blues produced by brothers Paul and Ross Godfrey, on beats/scratches and guitar/keyboards, respectively.

Dive Deep is the sixth and latest album from Morcheeba, who over the last decade have become the multi-million-selling darlings of downtempo with their soul and country-inflected, sampladelic mood music.

Here is an outfit whose refusal to be categorised musically extends to their very set-up, being a group only in the loosest sense of the word.On their first five albums they explored the gamut of contemporary alt.dance genres, pioneering a song-based form of dance music that would soon become known as trip hop or chill-out while collaborating with a variety of singers and musicians that posited Morcheeba as an eclectic and open-minded collective.
That idea is made explicit on Dive Deep. In 2008, Morcheeba have become a vehicle for the thoughts and experiments of brothers Paul and Ross Godfrey, with no fixed singer but rather a series of vocalists who enhance the atmosphere of fluidity and free-form exploration. â€œA lot of them I contacted through MySpace,â€ explains Paul, â€œand they were all people who wanted to genuinely contribute something. This made the whole process extremely easy. The songs were mainly co-written with the guests spontaneously in the studio. I had an emotional template for the album and they picked it up and ran with it.â€ 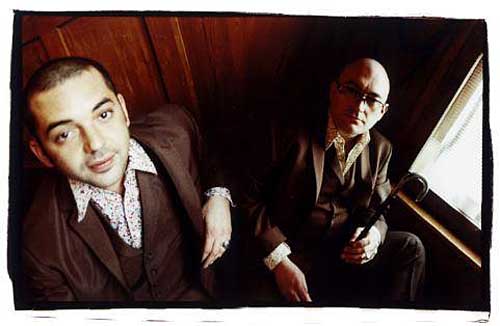 Those guests range from established names such as acclaimed singer-songwriter Judie Tzuke who Paul grew up listening to and has, he says, â€œa natural sense of melody – her voice is unique and extremely soulfulâ€, to relative newcomers such as Thomas Dybdahl, a star in his homeland of Norway (â€œI was gob-smacked â€“ again, his voice was so soulfulâ€), rapper Cool Calm Pete (â€œhis rap was heartfelt without being slushy and his delivery is one of the best I have ever heardâ€), Bradley Burgess (a friend from Folkestone with whom Paul bonded over a love of John Martyn) and Manda, a French singer who contacted the Godfreys via MySpace, admitting â€œit was her dream to sing with us.â€

But what of that â€œemotional templateâ€? Dive Deep is nothing if not a labour of love, a project that has rescued a band in danger of being derailed and restored the Godfreysâ€™ faith in music.

â€œFor me this album is already a success,â€ says Paul. â€œWhen I was listening to it come together I listened with my whole body. I could feel it bubble up from my calves through my gut and my chest and burst into ideas and moods that we could channel. â€œIt turned out to be the depression-beating therapy I really needed and I am so proud,â€ he adds, taking the opportunity to reflect on the intense period that led to the creation of Dive Deep.

â€œIt was great to have sold millions of records and toured the world but we were nervously exhausted and our working relationships deteriorated very quickly,â€ he says. â€œAfter our fourth album Charango we weren’t even on speaking terms and the tension on tour was making us all sick so Ross and I decided to part with Skye [singer on the first four Morcheeba albums].â€

The Godfreys drafted in another singer for fifth album The Antidote, but that merely confirmed what they already suspected: that they â€œno longer wanted to share any power with a permanent singer, so again we parted company – the tour to promote The Antidote was difficult to say the least. It left us in near-ruin.â€ Paul, who believes he was â€œat my unhappiest when Morcheeba were at their most successfulâ€, admits he â€œdidn’t realise making sweet music could be such a sour businessâ€.

Eventually, Ross decided to move to LA. As for Paul, pressures of work and the death of his father had a rather more negative effect. â€œI took to my bed with major depression: Iâ€™ve suffered on and off with depression since I was a teenager but this time it didn’t feel as if I would ever shake it. I had everything Iâ€™d ever wanted and still I felt as if it was all meaningless. We had conquered nearly every continent and worked with our heroes and it just wasn’t enough. I have a beautiful family and I was driving them insane. I was brought to my knees. So I decided to pour all these feelings into a new album.â€

The brothers agreed that Paul would produce the new album, just as well considering the amount of manic energy he now had to expend as he emerged from his slough of despond. â€œIt was like being 20 again. I slept on the studio floor for two years only eating takeaways and working 16-hour days. I must have nearly killed the young engineer [Paul Jones] I was working with because my energy was so intense. â€œOf course, I realised very early on that it was great to have control of the vision but I needed Ross and some great collaborators to bring it together.â€

Hence, the search on the internet for those guest vocalists and the resulting album of collaborative electronic folk and blues, Dive Deep, with its title evocative of a band immersing themselves in oceanic sound to ease their pain.

â€œIt felt great to put the past to rest and it was refreshing that nobody placed any expectations on us,â€ says Paul. â€œWe were free again to dive deep within and bring the music out naturally. We had done our fair share of trying to be fashionable and emulating other stuff and now we were confident enough to be ourselves.

â€œThere are metaphors on the album for the womb: I always liked the sounds underwater and thatâ€™s one of the things I aspire to in producing – that warm and textured sound. Thereâ€™s also a sense of swimming our way out of trouble, diving down to release a lot of past pain and anger. As it came to the surface it brought a lot of creativity with it. Itâ€™s hard to be an artist, trying to reinvent the wheel, but this felt very urgent and emotional.â€

It was down to Ross to conjure the sounds to match the mood of gentle devastation while his brother handled the lyrics, beats and production: â€œNick Drake produced by the Wu-Tang Clanâ€™s The RZAâ€ is how Ross describes the quietly powerful beat-detonations underpinning the folk/blues song styles, while the blend of soul-baring catharsis and modern technology he likens to (Dylanâ€™s) Blood On The Tracks meets Liquid Swords (by the Wu-Tangâ€™s Genius/GZA).

â€œWe love old music and traditional forms of songwriting but we donâ€™t live in the past; we really embrace modern ways of making music,â€ says Ross. â€œBlues has been my main influence since I was a little kid, but I also loved the way that a band like Fairport Convention would mix that with more English stuff and put it all to a reasonably funky beat. For us to continue pushing music in that direction is a great thing to do.

â€œThis is the first record weâ€™ve made where we werenâ€™t looking at our contemporaries and wondering whatâ€™s going on, where we just made the record we wanted to make,â€ he continues. â€œWe used an incredible amount of new technology for this album, but itâ€™s all new-old stuff â€“ ancient keyboards, like claviolines. Itâ€™s all very organic. The technology came into play in the way that we edited it and put it together.â€

Ross insists that, despite the backstory to the album and the feelings of despair that propelled it into being, Dive Deep is not an uncomfortable listen. Quite the opposite, he says. â€œItâ€™s a joy to listen to; a triumphant record. The process of catharsis enabled us to be very creative. The feeling is really summed up by the track Washed Away, where by the chorus all the negative stuff seems to get washed away like so many droplets of doubt.â€
Now you can dive deep into Dive Deep.
morcheeba.co.uk
myspace.com/morcheeb
MORCHEEBA
WEDNESDAY 11th JUNE
Spring & Airbrake
Tickets Â£19.00
Doors 9pm
Tickets on sale now from Katy Dalyâ€™s, Virgin & all usual Ticketmaster outlets. Credit card bookings & info 0870 243 4455 or book online at geturticket.com