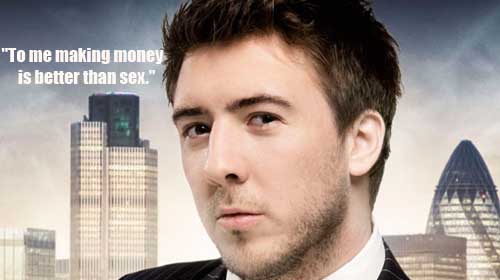 The fifth series of The Apprentice was launched yesterday and Ben Clarke (22) is one of 15 wannabe tycoons hoping to get a job with Sir Alan Sugar by winning the fifth series of the BBC show which starts next week.

Belfast born and bred, Ben Clarke rebellious stockbroker who considers himself to be ruthless and money-obsessed. The former Gavin Henson lookalike is inspired by the Playboy brand and cites Hugh Heffner as one of his most admired business figures. Rugby-playing Ben admits to being ‘cocky’ but insists that he takes business very seriously. He is a young professional with what he describes as a raw hunger to make as much money as possible.
He says: “To me making money is better than sex.”

BBC One’s multi-award-winning business entertainment series The Apprentice returns for a fifth run as a new line-up of corporate contenders battle for boardroom supremacy .A new intake of aspiring tycoons will face the biggest challenge of their careers to date â€“ embarking on a job interview from hell with multi-millionaire tycoon, Sir Alan Sugar. As Britain experiences its toughest economic conditions in decades, for this year’s prospects it really is “crunch” time.

Aided once again by no-nonsense advisers Nick Hewer and Margaret Mountford, Sir Alan will be sifting the wheat from the chaff in a series of gruelling tasks and gripping boardroom showdowns in what promises to be the most tense and unpredictable series yet.

Failure is not an option and mistakes won’t be tolerated as Sir Alan wastes no time in telling them who is boss: “I don’t care where you’re from or what your last job was. You think you can second guess or play me? Well let me tell you, I’m as hard to play as a Stradivarius. First prize â€“ you get to work for me. Second prize â€“ doesn’t exist.”

The CVs of the candidates reveal: a city stockbroker, an award-winning restaurant owner, a qualified lawyer, an aristocrat, a 21-year-old entrepreneur, an ex-professional footballer and a chess champion.
The high-flying line up also includes two international candidates who hope to eclipse their British counterparts: a New Yorker who has performed Mozart in Carnegie Hall and a Tanzanian beauty queen.

In the first five minutes of the launch episode the hopefuls are stunned to learn that one overwhelmed candidate has already buckled under the pressure and sensationally bailed out on the eve of the first boardroom briefing, leaving only 15 courageous contenders to vie for a shot at Britain’s most sought after apprenticeship.

As the unsettled aspirants come to terms with this deficit, a typically unsympathetic Sir Alan mounts expectation: “Pressure. That’s what it’s all about. Are you tough enough to put up with it?”

Episode one will follow the candidates as they set about the task to operate a successful cleaning business under the strict scrutiny of Nick and Margaret, who once again act as Sir Alan’s eyes and ears. Whether they shine shoes or wax cars, only one factor will be considered in the first boardroom showdown â€“ profit.

Series five will see egos collide and tempers soar as the cut-throat competition gets tougher and tougher with each challenge. The budding apprentices will open a catering service for busy professionals, rebrand an iconic British seaside resort in a bid to attract more tourists, invent and market a new piece of gym equipment and launch new products in a string of merciless missions with no second chances.

With this year’s applicants already thriving in their respective careers and desperate for a chance to reach the top of Sir Alan’s empire, rivalry is fierce as the 15 challengers pursue a six-figure salary on offer from one of the world’s most respected business moguls.

Sir Alan holds no punches as he makes his intentions clear to this year’s competitors: “I’m going to find out if you’re the real deal or just a bunch of empty designer suits and dresses.”

Although the candidates will live in a luxurious London penthouse with sweeping views of the capital, the weeks ahead will be anything but glamorous as they roll up their tailored sleeves and embark upon weeks of hard graft with only one emerging victorious.

For these elite professionals it is make or break time in the most daunting challenge they will ever face.

One job. Fifteen candidates. Sir Alan’s search for his Apprentice is about to begin…

The Apprentice â€“ You’re Fired! will also be making a welcome return immediately after the main show, on BBC Two, and is hosted again by Adrian Chiles. Each week the fired candidate is interrogated by business experts and a studio audience of viewers.