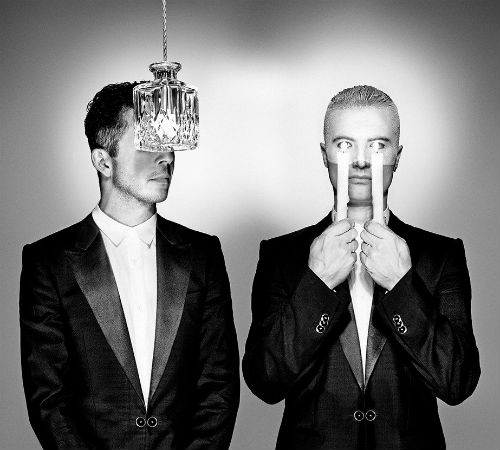 London-based creative electronic duo Monarchy – Andrew Armstrong and Ra Black – released their compelling EP ‘Almost Human’, on their own label Hacan Sound through Believe Digital. Andrew and Ra talk to us about their “glacial pop with a throbbing undercurrent of humanity”, synth-soaked world of relationships, obsessions and dreams and much more…

Last time we spoke was about the amazing video/track ‘Disintegration’ with the wonderful Dita Von Teese… Now we talk about your new EP ‘Almost Human’. What is changed since then?

We signed to Sony US/ Ultra for a single, Living Without You, which we were really happy with. Then we released this EP independently, and we’ve been working on our second album, which is almost ready to go for early next year. We’ve toured a lot, playing in the US and Spain. We probably fell in and out of love a few times, had quite a few parties, some fine food, went hiking in the Dolomites, raving at Coachella, and partying in Ibiza. We really can’t complain.

Our career never is the same, from one month to the other. We are constantly learning, and take the approach of wide eyed bewilderment to every new challenge. There’s nothing worse than being complacent and comfortable. So it’s very different to the early days, but change is the constant.

Can you tell us about the video video competition, for ‘Almost Human’, how did it go?

It was really great. We had loads of people interested, and five videos which were really good. One was shot in the Philippines, one in France, one in Italy, it was great to see all the art and effort that went into each one, as well as the different ways the directors approached the video. In the end, it was a tough decision, but one was a brilliant video that we absolutely love, so we’re really very happy to have their work. The video by Matthew Young was the winner…

Words beget words. Books, Movies, Friends. Sometimes we start with nothing and sing sounds plucked from the ether.

You run a smooth operation from your own studio in Hackney Downs. How important is to have total control on your project?

We are kind of control freaks. We have a specific sound in mind, and also a specific presentation and finish. So if someone can share our vision, like a video director, it works out really well. We can let go some of the control then. But if it starts going off track, we start putting our controlling cap on, and bring it in to heel.

It can be quite lonely sometimes. Yes we collaborate, but there’s a lot of solitary time needed in order to create something to collaborate with. There’s quite a few solitary hours spent in our basement studio in Hackney Downs.

Quite a range, from indie of Arcade Fire, to electronic ballads of Sohn, and more club music of Todd Terje or others. We listen to a mix of albums, and BoilerRoomTV sets.

We are finishing up our new album. We’re going to run a Pledge Music campaign for that, and hope to have that out early next year. We’re currently finishing off a few videos, and commissioning a few more. Videos take up a lot of our energy, but we like to get it right.