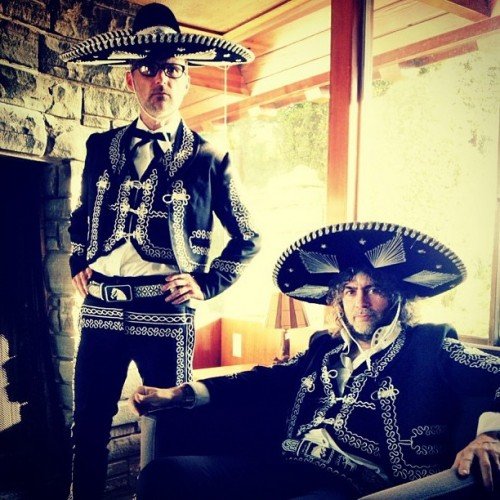 The superb video for Moby and Wayne Coyne from The Flaming Lips’ ‘The Perfect Life’, was shot in L.A with Coyne and Moby dressed up as a Mexican mariachi band.

The epic electronic soul track is the first single to be taken from Moby’s forthcoming new album ‘Innocents’ and will be released on 21st October 2013. 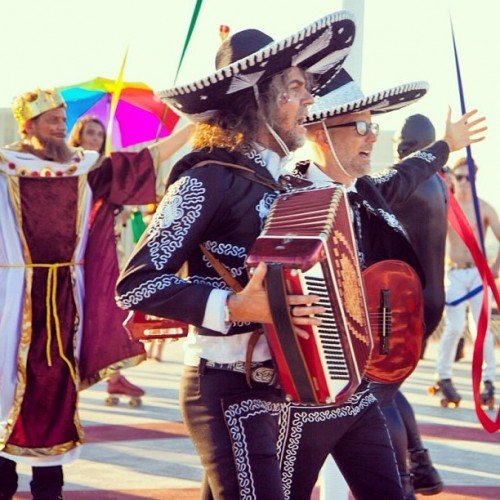 Moby explains: “A few weeks ago Wayne and I spent the day making a video for ‘The Perfect Life’. then at the end of the day we broke out an acoustic guitar and gathered all of the extras on a rooftop overlooking L.A and sang an unrehearsed, impromptu version of the song. Please keep in mind we had no idea what we were doing.”

On the collaboration with Coyne, Moby says: “Wayne Coyne and I ended up doing a duet on ‘The Perfect Life’: we sing the choruses together, and then go back and forth on the verses. Wayne and I first met in 1995, when The Flaming Lips and I were both opening up for a Red Hot Chili Peppers’ European tour.

We became friends, shared a dressing room and the same bad craft services, and watched the Chili Peppers from the side of the stage. I thought of Wayne for this song because The Flaming Lips have evolved in this very open, celebratory band when they play live, and that was the perfect vibe for what I was imagining for ‘The Perfect Life.’ I texted Wayne and said, ‘Hey, I have a song – want to sing on it?’ Thirty seconds later, he texted me back: ‘Yes, send it to me, it will be great.”

For ‘Innocents’ Moby worked with an outside producer, friend Mark “Spike” Stent, whose résumé includes Madonna, U2, Muse, Björk, and Massive Attack and for the first time has concentrated an entire album on collaborations which as well as Wayne Coyne (The Flaming Lips) features alt-rock legend Mark Lanegan, Cold Specks, Skylar Grey – best known for co-writing and performing on Eminem and Rihanna’s Love The Way You Lie; indie-folk singer Damien Jurado, and Inyang Bassey who was the vocalist on ‘The Right Thing’ from ‘Destroyed’.