NORTHERN Ireland band The Minnows will make a long awaited return to the Belfast stage with an exclusive appearance in the Black Box on Saturday November 29 to mark the release of their critically acclaimed new album Leonard Cohenâ€™s Happy Compared To Me.
The band warmed up for the Belfast gig, their only appearance in Northern Ireland this year, at the weekend with a â€˜secretâ€™ show in the intimate surroundings of a small Donegal pub. 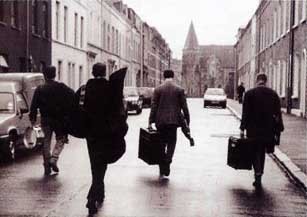 The atmosphere in Donegal was electric as the band played all of the tracks from the new album, as well as a selection of past hits and more new material.
Next up for The Minnows is a live show on Friday November 14 at the Half Moon Club in London, a live music venue with a rock and roll great tradition, having played host in the past to legendary bands like The Who, The Rolling Stones and early U2.
Then itâ€™s the eagerly anticipated return home to the Black Box at the end of the month, a gig that the band has been looking forward to for months, and one that Minnowsâ€™ front man Michael Rafferty is sure will be sold out.
He said: â€œThis is our first official live performance in Northern Ireland since the turn of the millennium but weâ€™ve been working really hard to make sure that it will be worth the wait for those who can get a ticket.
â€œOur album Leonard Cohenâ€™s Happy Compared To Me has been so well received in the first few weeks since its release, that itâ€™s really important for us to back this up with live shows that are equally good, if not better.
â€œNow, the rehearsing is almost finished and itâ€™s time to deliver the goods on stage.Â  Our secret gig in Donegal was an overwhelming success and now we canâ€™t wait to take the show to a larger audience.Â  If the atmosphere in Belfast and London is anything like it was in Downings, then it will really be a night to remember.
â€œWe only announced the Belfast gig on our website last week and the Black Box has reported that tickets are selling really quickly so it looks like weâ€™ll be playing our first home show to a packed house which is really exciting”.
Tickets for the exclusive Belfast show are available on blackboxbelfast.com

The Minnowsâ€™ album Leonard Cohenâ€™s Happy Compared To Me is available to buy at theminnows.com , in HMV outlets throughout Ireland and the Good Vibes record store in Belfast.