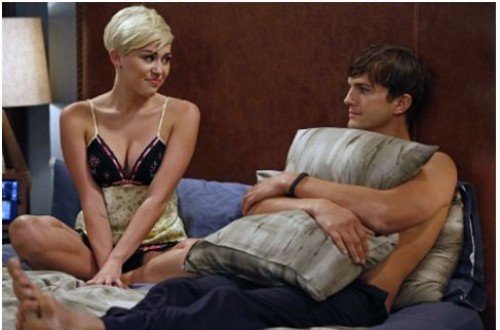 Miley Cyrus is shaking off her Hannah Montana image and getting saucy with her hugely anticipated Two and a Half Men appearance when she appears in the hit sitcom on Comedy Central, Monday 22nd October at 9pm.

The 19-year-old landed a guest spot and plays Missi, an old family friend of Walden’s who comes to visit for a week. With the new Miley Cyrus haircut – a peroxide blonde pixie hairdo – it’s clear that Miley is leaving her Disney days behind as she swaps preppy clothes for a skimpy lingerie set in promo shots taken of her with Ashton from he show.

It’s not Ashton that she’s after in the programme though – so Mila Kunis can breathe a sigh of relief. Miley’s character Missi has her sights set on Jake – played by Angus T. Jones when he returns home from the army.

Her latest television appearance seems to be the next step in her campaign to become a sex symbol, rather than a squeaky-clean teen star.