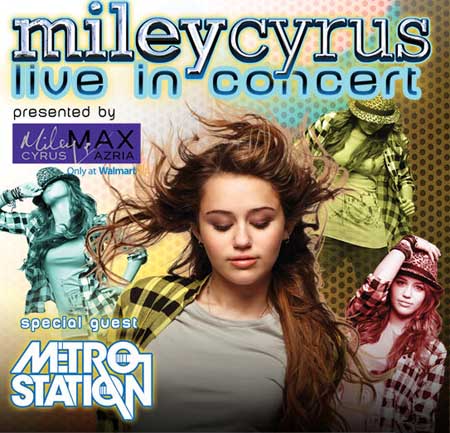 Teen superstar MILEY CYRUS will play Dublin for the first time ever with 2 Shows at The O2 on 16 & 17 December 2009. This highly anticipated show will be the first chance for Irish fans to see one of the most exciting shows of the year. Miley will be supported by the chart topping pop/rock group Metro Station featuring older brother Trace Cyrus on vocals and guitar.


Miley Cyrus first burst on the scene starring as Miley Stewart/Hannah Montana in the smash hit Disney Channel series Hannah Montana. Following the success of the show, a soundtrack CD was released in October 2006, and Cyrus’ solo music career began in earnest with the release of her debut album, Meet Miley Cyrus in June of 2007. Her second album, Breakout, was released in July of 2008, and turned the young performer into a superstar. Both albums debuted at No.1 on the Billboard 200. 2008 also saw the release of the Hannah Montana & Miley Cyrus: Best of Both Worlds Concert film which were huge hits across the globe.

Cyrus also earned a Golden Globe nomination for Best Original Song for “I Thought I Lost You,” from the soundtrack to the successful animated 2008 film Bolt, which also featured Cyrusâ€™ voice in a starring role. Hannah Montana: The Movie was released on April 10, 2009, for which Cyrus recorded the main single, “The Climb.” Cyrus was listed as one of Time magazine’s 100 Most Influential People in The World in 2008, while Forbes ranked her No.35 on “The Celebrity 100” list.
www.mileycyrus.com
www.metrostationmusic.com

MILEY CYRUS
CONFIRMS HER FIRST EVER IRISH DATES
THE O2 DUBLIN â€“ 16 & 17 DECEMBER 2009
WITH SUPPORT FROM METRO STATION
Tickets go on sale on Friday 12 June at 9.00am from all Ticketmaster outlets Nationwide, Booking Line 0818 719300 and online at www.ticketmaster.ie
Tickets are strictly limited to 4 per Booking.