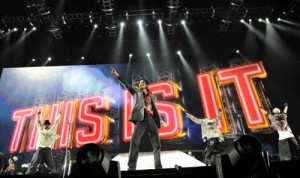 So what is This Is It? A concert film without the concert. A backstage musical that takes place almost entirely onstage. A no-warts hagiography that still gets the audience closer to the real Michael Jackson â€” MJ the performer, that is â€” than anything in the man’s avidly documented history.

Wisely and decently ignoring the circumstances of his death and the circus that followed it, Ortega focuses on the re-creation of about a dozen Jackson standards for the concert. (“Beat It,” “Billie Jean,” “Wanna Be Startin’ Somethin’,” “Black and White” and “I’ll Be There” are all here.) At times several takes of a song are edited into one performance; you know because Jackson is sporting different rehearsal clothes. The footage was shot so the star could study his work and that of his crew, thus it has the artlessness of visual stenography. The art is in what we’re privileged to watch: a perfectionist who quietly pushes himself to prove he’s still got it. 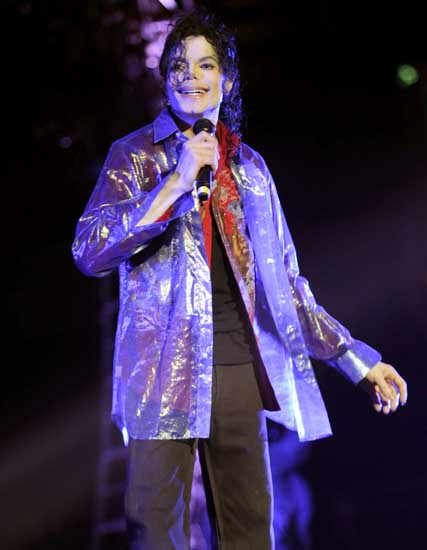 The movie is worlds removed from another making-of concert doc, Madonna’s calculatedly scandalous Truth or Dare, and closer to old let’s-put-on-a-show musicals like the Busby Berkeley 42nd Street, the Garland-Mickey Rooney Babes in Arms and the Broadway standard A Chorus Line. It has all the elements: the big star (Jackson), the guiding impresario (Ortega) and, supporting them, the whole retinue of gifted, ambitious singers and dancers. The movie opens with the prospective dancers’ declarations of the inspiration impact Jackson has had on them. (Okay, they really need this job, but the effusions sound genuine.) Later, the men have to rehearse one of Jackson’s more notorious dance figures. Apparently, grabbing your crotch while gliding across the stage is more difficult than it looks.

There are only two differences between This and the old musicals. Instead of the star breaking a leg, he dies after we see the fruit of his labors. And in This Is It the emphasis is not on love affairs â€” though Jackson proclaims a tender “I love you” to everyone in sight â€” but on the energizing, exhausting business of making a spectacle spectacular.
www.time.com