About 80 percent of the surgeries performed in the U.S. put patients at risk of being inflicted with delirium, dementia or death because a brain monitor is not used by the anesthesiologist.

That is one of the secrets unveiled in a new book recently published by Dr. Barry Friedberg, an acclaimed anesthesiologist who has become a much sought-after expert on the role of propofol in Michael Jackson’s death.

“The simple use of a brain monitor during surgery to measure the effect the anesthesia is having on the patient will prevent all risk of over-medication and almost all risk of under-medication,” stresses Dr. Friedberg, author of Getting Over Going Under: 5 Things You MUST Know Before Anesthesia.

Dr. Friedberg was the featured expert on propofol cited in the August 20, 2009 People’s Magazine article on Michael Jackson’s death and has been interviewed by several radio and television journalists about Michael Jackson and his physician. 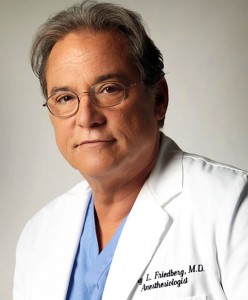 An anesthesiologist with more than 30 years’ experience, Dr. Friedberg has developed a new standard of care for the administration of anesthesia that virtually eliminates any damage to the brain during surgery and prevents nausea and vomiting after the patient wakes up. By adding use of a brain monitor, the Friedberg Goldilocks Method eliminates the danger of over-medication and almost all risk of the patient waking up during surgery.

Dr. Friedberg says the major reasons a brain monitor is not used during surgery is because the $20 cost cannot be billed to Medicare and most major insurance companies, surgeons and anesthesiologists are resistant to change.

“But if the patient insists on use of a brain monitor in the right way their request will be granted most of the time,” adds Friedberg. “If not, the patient merely has to exercise the power of the dollar and go to another hospital or facility that is willing to use a brain monitor.”

At his website, www.drbarryfriedberg.com the author offers three free letters that can be downloaded for use in requesting use of a brain monitor.

The form letters are for the intended surgeon, anesthesiologist and the hospital administrator.