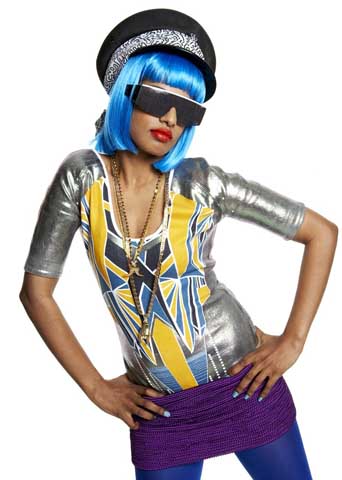 M.I.A returns to Ireland following her amazing performance at Electric Picnic this year, M.I.A will play Live at the Marquee Phoenix Park on Friday 7th Dec.
The lady behind one of the albums of the year is the latest addition to play Dublinâ€™s Live at the Marquee in the Phoenix Park alongside Cascada, Justice & Kanye West this Winter.
M.I.A is often held up as someone different, someone with ‘that’ special something and an unerring ability to always keep ahead of the pack, continually turning in music that sounds both exciting and fresh. KALA will not change this viewpoint, it will only fuel it further.

The majority of the record was made when she was supposed to be taking time out and traveling. When she ended up in Chennai, India, she spent weeks live recording drum patterns with local percussionists, writing new songs like “BirdFlu” and “20 Dollar”, holed up in a studio used normally for Bollywood soundtracks. She ultimately filmed a fully-cast video for “BirdFlu” and freeing herself from the constraints of waiting for the time it takes to release records nowadays, aired it on the internet for free sans a commercial release to accompany it. It sent the anticipation for this album to nuclear levels. Subsequent trips found her writing and recording in Trinidad, Jamaica, Australia, Japan and briefly in the US, where she spent a New Year’s Eve in Baltimore with producer Blaqstarr before finding a studio to make “The Turn” with him.

So while her buzzed-about 2005 debut album, Arular, found her in the leftfield of both dance beats and Third World politics, rapping about her early life split between war-torn Sri Lanka and London’s council estates, KALA has got M.I.A. out in the global street or “World Town”, as she envisions it in one song. It’s from there that she continues to voice for the people pushed to the side in the shell game of international geopolitics, “the Third World deserves freedom of speech just like everyone else,” she says. “We want to fight the battle to say what we want, whether to be serious or just make fun of ourselves. That’s what ‘World Town’ is about; that’s what ‘Paper Planes’ is about â€” it’s what people in the Third World live through,” she continues.

Arular was a bedroom dancehall rocker that fire-wired an international fan base and appealed to plugged-in critics, KALA is a different beast, it’s the beat of the street itself â€” the sound of roadside sound systems, taxicab transistors, DVD-wired dollar vans, motorbike couriers and parking lot pull-ups. It’s also the sound of M.I.A. digging in as both an artist and a producer.

It never occurred to her to repeat the ideas from Arular in a paint by numbers follow-up, so even when returning to team up with producers $witch and Diplo, she often had the two meet her out in the world â€” whether it was Trinidad’s rough Laventille district or a Tokyo hotel room turned recording booth â€” and pushed the collaborations far enough to arrive at something new. KALA also features M.I.A.’s first guest artists: the Nigerian rapper Afrikan Boy who rhymes on the raving “Hussel”, a group of Aborigine adolescents, The Wilcannia Mob, who appear on the didgeridoo beat of “Mango Pickle Down River” and Timbaland who crops up on album closer, “Come Around”.

“For a while I thought I didn’t have time to grow,” she says. “But I realized my growth happened on the road. By now I thought everyone would be making albums like my first one, but that hasn’t happened. So I like this album, if only because it’s so different. I think it’s going to take a few listens, but you gotta give people the benefit of the doubt.”

M.I.A
Live at the Marquee Phoenix Park â€“ Friday 7th December
Tickets for M.I.A will be â‚¬44.20 will go on sale this Friday 19th Oct at 9am from all Ticketmaster outlets nationwide, Booking line no.0818 719 300 and online at www.aikenpromotions.com