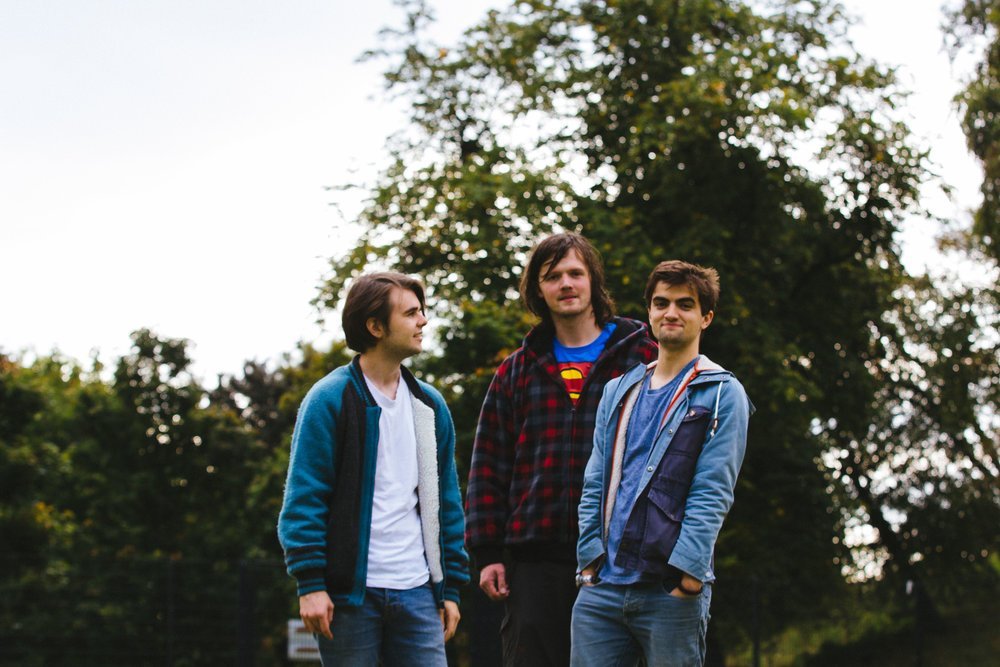 Hi One Big Fuse how are you today?

Hi there! I am absolutely smashing thank you very much. You can call me David though, like that cool teacher who let you call him by his first name.

What’s your new single ‘Swimming Pool’ all about?

In general terms, it’s just talking about the fact that no matter how much we act as though we’ve got it all together, things can fall apart as quickly as we dream them up. A lot of our songs are about death and this one is just saying that there isn’t really a lot of decorum we can take to the grave. So, I suppose the moral of the story is, everyone dies and when you do, you’ll probably look a bit daft. I should write greeting cards.

When coming up with fresh song ideas, how does your creative process work in the band?

Our guitarist Calum stays up in Stornoway while myself (drums) and Scott (bass and vocals) are based in Glasgow so we usually just fire demos back and forth on dropbox. We can put the barebones to a song together with programmed drums and rough vocal recordings then develop the songs properly when we’re rehearsing together.

Not to be too predictable a three piece Scottish alt rock band but Biffy Clyro’s early albums were really important to us in the early stages of getting into music. Just the fearless creativity going on really challenged me in the way I approached music. Mainly because the time signatures and song structuring confused the arse off of me.

Wherever there’s money would be nice. Scott has cats to feed.

How has the local music scene back home in Scotland impacted upon your outlook on music?

A good live music scene has always made us tick. There was a band from Stornoway a few years ago called Crash My Model Car that got everyone excited, for myself in Skye there was a band called Stereoglo. There was just this buzz that a local band were doing something that could get big and any moment. I think that’s why we’re so influenced by Scottish bands, there’s just something really appealing in seeing what’s happening in our neck of the woods.

And would you recommend any bands/artists from your local music scene?

Donnie Willow are absolutely incredible. I’ve seen a couple of their gigs in Glasgow and they are just terrifyingly good. Mount Doubt are a brilliant alt pop band from Edinburgh that are definitely worth checking out too.

If you were marooned on a desert island, what three records would you want to have with you?

We grew up marooned on desert islands thankyouverymuch. Still, I can barely whittle it down to three records I’d keep in the car so here goes…

Midnight Organ Fight by Frightened Rabbit. No album has ever hit me like that one. The layered melodies really stick with you and the lyrics are just so bold and honest. I think that’s what makes it such a relatable album to so many people. I was heartbroken by Scott Hutchison’s passing earlier this year but I think the way he poured himself into his art keeps that much of him alive today.

Vertigo of Bliss by Biffy Clyro. This has to be my favourite album of theirs which is gutting because they never play any of it live! The last time I saw them, they played the intro to With Aplomb then went into Many of Horror and I felt like they just kicked the old biffy fans in the balls. Anyway, enough about my balls. It’s a class album.

Saved by Bob Dylan. One of the albums he released when he became a Christian. Being a preacher’s kid, that made this album fair game for 8 year old me. Still, he is one of the best song writers since people started making statements like that and it is a really well put together album that always brings a smile to my eardrum.

For those who haven’t seen you play live, what can people expect from a One Big Fuse live performance?

The pent up aggression of three childhoods spent on the Presbyterian Scottish islands. And some awkward attempts at stage craic from myself and Scott while Calum gets his guitar in tune. Then back to the aggression.

Finally, what does the rest of 2018 have in store for you?

We’ll be supporting Colin Macleod this December in Stornoway (bet you’d never heard of that wee town before but you’re getting an earful of it now. Like when you learn a new word then hear someone saying it the next week. Isn’t that weird?)

We’ve also got a music video for ‘Swimming Pool’ coming out really soon with a bunch of ‘making of’ clips so you get to know the REAL us.

And while we bedazzle you with all that carry on, we’ll be furtively working away behind the scenes on more music for you to hear very soon…There’s also Christmas round the corner which is always a laugh.