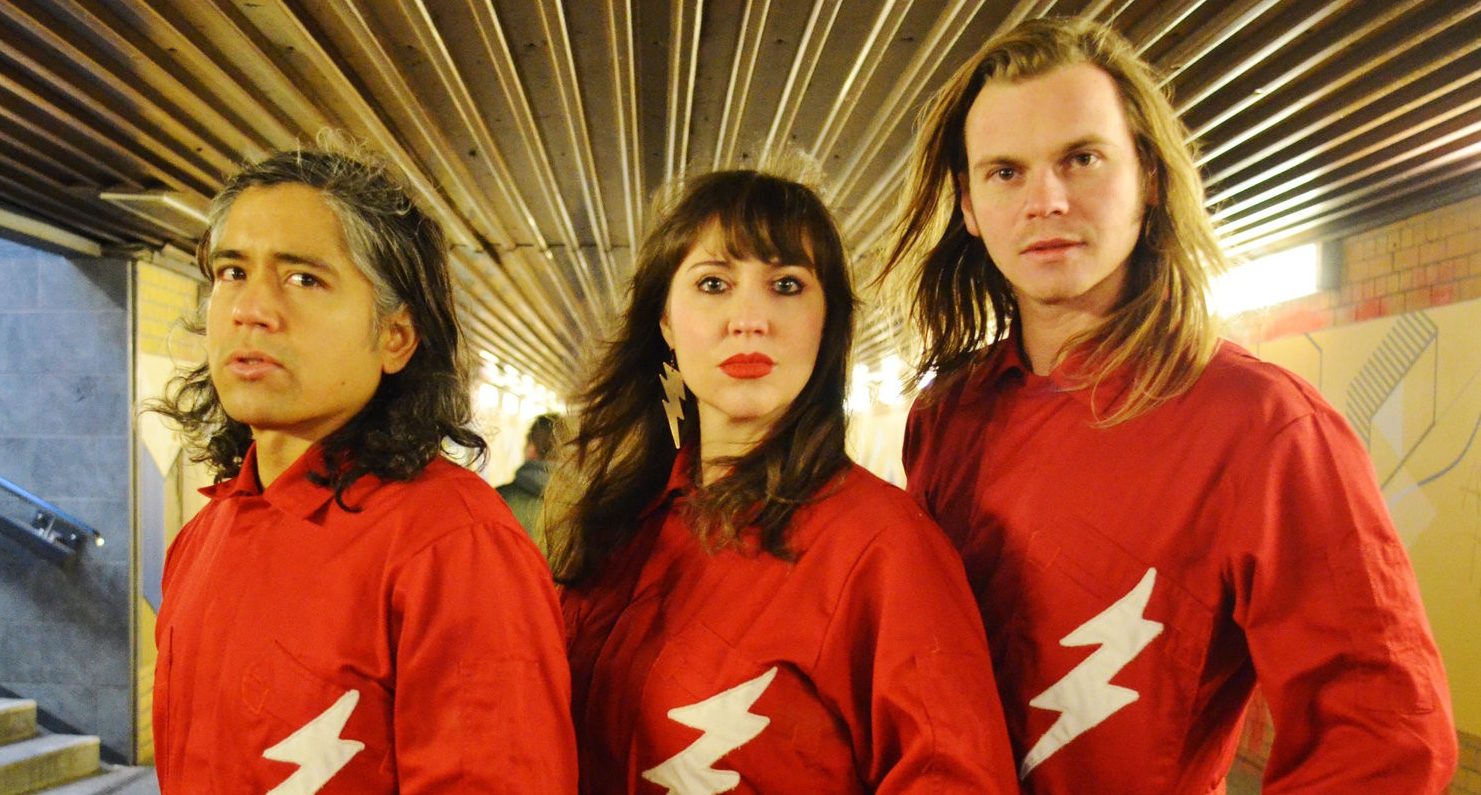 Hi Mexican Radio how are you?

Dyan Valdés (synths and vocals): Hi FM! We are very well, thanks. Our single and video “Night of the Nihilist” just came out, and the full album Destruction / Reconstruction comes out 20 September. Very exciting times!

Your new single ’Night of the Nihilist’ has just been released, can you tell us the themes contained within the song?

The song was inspired by the Russian nihilist movement from the 1860s and makes reference to their assassination of Tsar Alexander II. The narrator of the song also takes influence from the nihilist character Bazarov from Ivan Turgenev’s novel Fathers and Sons. The song is about rejecting everything, wreaking righteous havoc and still managing to have a good time in the process.

There’s also a conspiratorial vibe to the song, it’s almost like a manifesto written behind closed doors by people who are eager to unleash their “holy hate” on the world outside as soon as the sun comes up – once they’ve finished dancing the night away. The lyrics are an attempt to get into the mindset of these people who felt compelled to reject everything and cause chaos, living and dying by that pledge. Most of us can’t relate to throwing a bomb at an emperor’s carriage, but I think we can all understand that feeling of desperation when you’re backed into a corner and the only way out of a situation is to destroy everything around you.

We write very quickly, trying to keep everything simple and raw. Pretty early on, we decided that our synth punk style would be very repetitive – no complex arrangements or changes. We try to reduce everything as much as possible, so the challenge is to make a song with “no changes” sonically interesting throughout. When we play together in a room, we can identify the groove of the song and then build on that foundation. As a band we have decided to always record live and analogue with no overdubs, so that means that the songs are limited to what we can play at that moment – when you are strict about how many tracks you are allowed, every single sound needs to be carefully considered. It’s all about economy.

As a German based band how does the country and the local music and art scenes influence your music?

Berlin has been an incredibly fertile artistic ground for decades – the city is full of creative people. When Nathaniel (vocals/synths/effects) and I first moved here 9 years ago, I was eager to follow in the footsteps of other musicians who have come here from abroad to find inspiration – David Bowie, Iggy Pop, Nick Cave, etc. However in the last few years, I’ve been discovering more and more of Berlin’s homegrown musical history.

Bands like Malaria!, Ideal and of course Einstürzende Neubauten came out of 1980s West Berlin, and have been hugely influential for us as a band. And the city’s tradition of fostering innovative music continues today – punk and rock venues like SO36, Kirche von Unten, and Schokoladen give space to all kinds of emerging talent. The city’s countercultural DIY aesthetic encourages everyone to work together and get involved in each others’ projects – the goal is not commercial, but rather to create something interesting and inspiring.

We do a monthly radio show on KCRW Berlin called “The Mexican Radio Radio Show,” so we are constantly on the lookout for new bands in town. We recently played tracks by Gym Tonic and Benzin, both new bands based in Berlin, which are very cool.

Who are your biggest influences as musicians?

Mexican Radio started as a German-language Fall cover band called Der Sturz, so I would have to put The Fall as our biggest musical influence. Their relentlessly repetitive music and unapologetically brash vocals have definitely made an impact on the band.

These aren’t the most “synth punk” choices, but after giving it some thought…I would probably take Low by David Bowie, just because over the years my understanding of it and relationship with it have changed so much as I have grown up – I imagine that even in my twilight years it will continue to reveal new things to me. Chairs Missing by Wire has a singular voice while at the same time managing to convey many different moods, which would be important for standing the test of time.

And finally, Blueberry Boat by The Fiery Furnaces is one of the most delightfully strange records I’ve ever loved. There are enough musical and lyrical gems hidden throughout that album, I could happily spend the next several decades on some deserted beach just trying to figure out what the hell it’s actually about!

We swore off stringed instruments from the very beginning, so we already sound quite different from most typical guitar-based bands. By eschewing modern recording technology and choosing to record everything live, we’ve created a very raw and urgent sound. A lot of the new punk bands we play on the radio show also seem to be connecting with older recording methods and creating a sound that sounds deliberately less polished. I think it makes for a more intimate listening experience, and sounds much more exciting than something that has been overworked to death.

For those who haven’t seen you play live, what is a Mexican Radio performance like?

The live show is like a psychotic radio broadcast from another planet – we open with a “station ID” for Mexican Radio before launching into an onslaught of one high-energy song after another. It is very important to us to put on a proper performance, and we want people to be completely immersed in the world of Mexican Radio.

Destruction / Reconstruction comes out on 20 September, and we will hopefully play a lot of shows for the rest of this year and in the beginning of next year to promote it. We’d love to get over to the UK and play in some other European countries as well. I have some very exciting guests lined up for “The Mexican Radio Radio Show,” our monthly radio show on KCRW Berlin. While we tour and work on the radio show, we will also be writing for a new record to complete our White/Red/Black color trilogy in 2020.