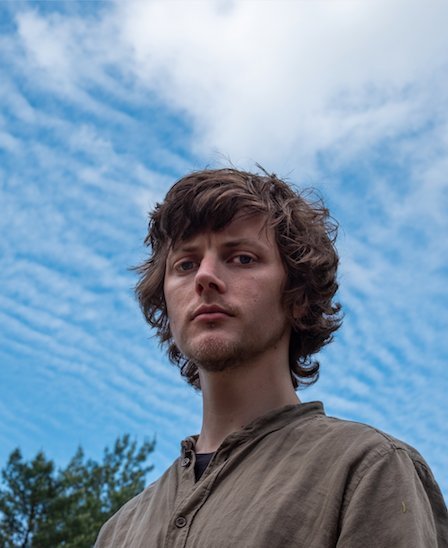 Since moving to the west coast of Sweden in recent years, London-bred singer and songwriter Joshua Thomas Henry has found that moving to the Scandinavian region has been a powerful muse behind his love of songwriting as he now looks to make his mark with his wonderfully wistful debut single Oh, You’re Thinking Of Moving To Berlin?.

Channelling the soft and light-hearted approach of Neutral Milk Hotel, Bon Iver and The Tallest Man On Earth, this soft and sweeping new offering looks to highlight the first of many broad and emotive releases from the frontman, as he also plans to release his debut EP later this year.

So with his name beginning to gain momentum, we had a chat with him to find out more about his influences and what led him down this musical path.

I’m mainly a guitarist nowadays, but learning Elton John songs on an old piano we had at home was where I first started to really get interested in music and songwriting in a more meaningful way. Learning to play Tiny Dancer was a pivotal moment!

In terms of direct musical inspiration, there’s too many to list, but Paul Simon’s probably in the top 5. I love those classic 60s and 70s stars, but there’s no point trying to recreate something that’s already been done. Artists always inspire me when you can hear where they’re coming from, but they’re moving it forward to a new place. Bibio and Blake Mills, for example, are artists I really admire for that reason.

But inspiration can come from anywhere; it doesn’t have to be musical. For me it’s often just a turn of phrase, maybe an overheard conversation, or a line in a newspaper that sets something off.

I was a serious Led Zeppelin fan when I was 17. I never really liked hard rock or heavy music that much, but they had a lightness to them, and I was drawn to albums like Led Zeppelin III with some really interesting acoustic tracks. And that led to artists like Joni Mitchell and Nick Drake as well.
Of course I also listened to bands like The Strokes, The Killers and Bloc Party like every other British teenager in those days.

Nothing too loud. I’m fragile in the morning.

I definitely use specific people and events as inspiration in my songs, but there’s a lot of imagined details as well. I also like to take ideas from films, novels, other songs and so on. So it’s all mixed up. And then I tend to use a lot of imagery and abstraction in my lyrics so it’s not always obvious what I’m singing about anyway.

Releasing this first single and seeing some of the reaction it’s got has been pretty rewarding.

Probably something more serious and stable, like being a pro skateboarder.

Joshua Thomas Henry’s debut single Oh, So You’re Thinking Of Moving To Berlin? is available to stream and download now. Have a listen to it below.