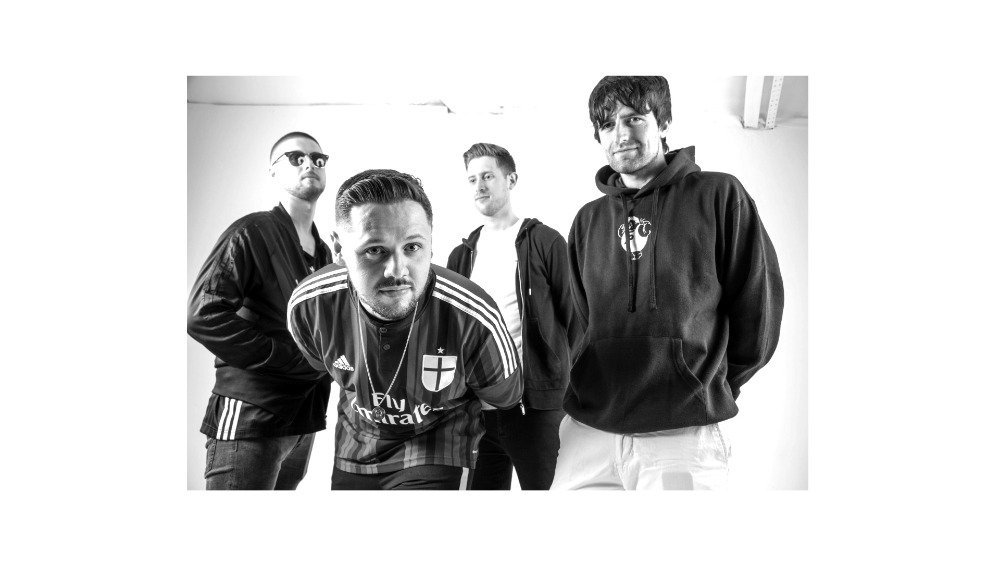 Scottish four-piece Dictator present, Anthem For A Doomed Youth, their sonic manifesto aimed at the disaffected youth of today’s world…

Hey Dictator! How are you today?

We’re bloody brilliant thanks, we hope you’re just as good.

Yes Im feeling great thanks!…Please introduce yourselves to our readers:

We all used to be in various boy bands when we grew up, in the end it was just a mutual love for Gary Barlow that brought us together! Nah, strap yourself in for some rock and roll folklore. We had a couple beers one night and said we should get together for a jam, we had a few jams then genuinely just seemed to gel! We wrote a few songs and managed to play a few gigs under a random assortment of names before we decided we should maybe start taking it a little more seriously, hard to do when you don’t take yourself very seriously at the best of times!

What is your new single Anthem For A Doomed Youth all about?

So on the subject of not taking ourselves too seriously… it’s about politics, always a barrel of laughs. As we’ve been growing up our interest in politics has been growing along with us, the only issue is that the more you learn about it the more frustrated you start becoming. It started off with a little news snippet on knife crime in London, not something I even pretend to have detailed knowledge on. It cut to a well to do politician who’s never seen a bit of trouble in his life blaming the communities as being a breeding ground for trouble, Akala was on and explained the situation to them, presenting the facts to support a case that the government has failed so many of the communities in the first place, but it was almost as if he was being scoffed at. That sort of stuff makes your blood boil as these guys are supposed to represent us and be the best of us but instead they’re career politicians who have one eye on the prize at all times. I guess in short you start to see the cracks in the so called integrity, if you’re a creative in any way shape or form, it’s normally a feeling that sparks you to create, it just so happened that on this occasion that feeling was one of frustration that turned into the main hook of the song being that you grow older, colder and you realise that a lot of the time you don’t know who’s right or wrong. Nice light subject to fit into a 3 minute song.

So we’re massive fans of Gorilliaz, the concept and the tunes. I remember when we first started jamming we learned 19-2000 and it was pretty much the basis we started the band on. We’ve a load of indie influences as well as hip hop believe it or not. I guess with Gorillaz it’s the fact you can have a cross genre approach without being too disjointed as a musical collective, that’s a bit of us that is.

What’s your favourite venue to play in Scotland?

Chance the Rapper. Hands down best collaborator you could want. Him and his Manager Pat Corcoran are changing the way we look at the music industry in general, they’re game changers in our eyes but I think it’s sometimes overlooked how talented he is as an artist. Added to that is the fact we’re all into hip hop, we’ve even dabbled in that world for a bit, we’re all just genuinely terrible at rapping that there’s no way in hell we would release anything in that space ourselves!

Hawt Sauce and over priced coffee. Would love to give you the name of a limited edition vinyl from the 1950’s and pretend I’ve been lusting over it for years but I’m a pretty simple guy, some weird tasting hot sauce and hipster coffee I’m in paradise.

Make our first million bucks on those sweet streaming royalties and retire to the Bahamas hopefully. Nah in all honesty I just hope we keep releasing music and keep up the gigging, maybe even get Tuts! I’d love if we could blag our way to a few festival slots next summer so we can play up and down the country but our main aim for this is just to have fun and give it the best shot in the moment, the goal for 2020 will be to look back and know we gave it our all no matter what happens.

Time to shamelessly plug our socials. We’re on Insta (dictatorband) Facebook (dictvtor) and Twitter (@dictvtor) funny fact about the v in the Facebook/Twitter name is that it’s almost as if there’s a million parody accounts of people pretending to be dictators… luckily on Instagram there’s only a few! We’re also on Spotify and Apple Music if you want to give our page a follow there you can keep up to date with our releases, if you don’t like our music though you can always just tune into our questionable patter through our Instagram stories.

If you don’t like our music please come along and see us anyway, even if you just heckle us, we’ll probably buy you a drink.