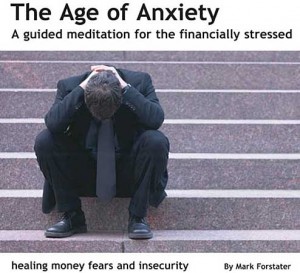 Meditation is the Answer to the Credit Crunch During our Age of Anxiety.
Although it may have its origins in the East, the effects and benefits meditation can have during times of recession have rarely been more acutely in evidence than right now in the West. A new CD features a guided meditation for all those who are financially stressed by the current credit crunch, feel lost and in despair and donâ€™t know what to do. This probably applies to most adults in the UK today, and there could not be a more appropriate time for film producer and author Mark Forstater to launch his adrenalising new audio CD The Age of Anxiety.

â€œThe guided meditation I have createdâ€, says Mark, â€œis designed to be a kind of mini-vacation for the mind. Follow it and you will be able to deal more effectively with your fears and problems. It can increase your innate capability to deal with adversity, because in 30 minutes or so you can transport yourself out of a state of constant worry â€“ and take a break that truly refreshes, a short therapeutic holiday for the self.â€

Mark Forstaterâ€™s The Age of Anxiety is essential listening for everyone who is battling to keep their heads above water in the current economic climate. 30 minutes each day with this â€˜Guided Meditation for the Financially Stressedâ€™ helps to give a fresh perspective on life that can help everybody deal more effectively with their fears and problems and increase their ability to deal with adversity.

The Age of Anxiety CD is fully instructional and provides the listener with all the information they need to complete a successful meditation practice. It is perfect for beginners and for the less physically adept since it does not require a difficult cross-legged posture. Anyone can do it, and the CD has been designed to be easy and user-friendly.

Mark Forstater is a Film, TV, Radio and Audio Producer. He has produced many films including Monty Python and the Holy Grail, The Grass is Singing, based on the book of the same name written by Doris Lessing, and The Wolves of Willoughby Chase. He has also forged a successful career as an author, writing on subjects such as Yoga, the teachings of Marcus Aurelius and the philosophy of Socrates. Markâ€™s interest in spiritual matters began in the 1970s when he was introduced to the works of
Confucius, Mencius, Lao Tzu and Chuang Tzu. He was immediately inspired by Chinese philosophy. His self-cultivation practices include meditation, yoga and tai chi.

The Age of Anxiety: A Guided Meditation for the Financially Stressed is released this week and is available to download from
www.theageofanxiety.com at Â£7.99 or as a CD to purchase from the same website at Â£12.99 plus Â£2 postage and packing.