Berlin-based Dream-Pop duo Me and My Drummer – Charlotte Brandi and Matze Pröllochs – have their single ‘Blue Splinter View’ out now and their album ‘Love is a Fridge’ is out February 12th via Sinnbus.

Hello Me And My Drummer! You’ve been around for a while but for those who don’t know who you are, please introduce yourselves!

Hey there. We are Charlotte Brandi and Matze Proellochs, a Duo from Berlin. We met at a theatre in Southern Germany in 2008 and have been making Dream Pop together since 2009.

You’ve not released anything since 2012’s debut album ‘The Hawk, The Beak, The Prey’…where have you been?

Oh, we took our time to “walk around the block” as we say in Germany. We went to lots of different places to write new music, for example to the countryside of Western Germany where there were only horses and cows around where we were staying. We also went to an old attic in Görlitz, the easternmost town of Germany, where you can cross a little bridge over a river and step on polish ground…In the end, we tried everything to avoid writing in our shitty rehearsal room in Berlin, basically.

You know, you can write a lot of stuff and that can be a lot of fun – we wrote quite a few songs out there in those places that had a twilight kind of touch to them. But I (Charlotte) pass through many states of euphoria and distrust towards new material, especially after “The Hawk, The Beak, The Prey” has been so well received. Deep inside, something in me knew that we would have to wait a little longer until the final vision would take shape in front of us. That “little longer” turned into three years in the end.

‘Love Is A Fridge’ is a strange title – can you tell us more?

It has several levels to it. It´s of course a reference to “Life Is a Bitch” but since there happen to be so many songs about relationships and little short stories of a romantic kind on this album, we knew it would have to have “Love” inside the name somewhere. I (Charlotte) had a tough year 2015, I broke my left foot in several places, it´s almost a miracle that I can walk again but I’m only allowed 30 minutes of walking per day.

I also had some strange encounters this year from which one was with someone who called me “a cold store”. That reminded me of a song an Ex boyfriend of mine wrote two years ago which he called “Kühlschrank” (fridge) and he said it was dedicated to me.

The last thing about this title is, that you can subtitle it with many stupid endings like: “Love is a fridge – there is always something getting moldy in the back” or “Love is a fridge – when you open the door, the light goes on” and so on. We liked that. 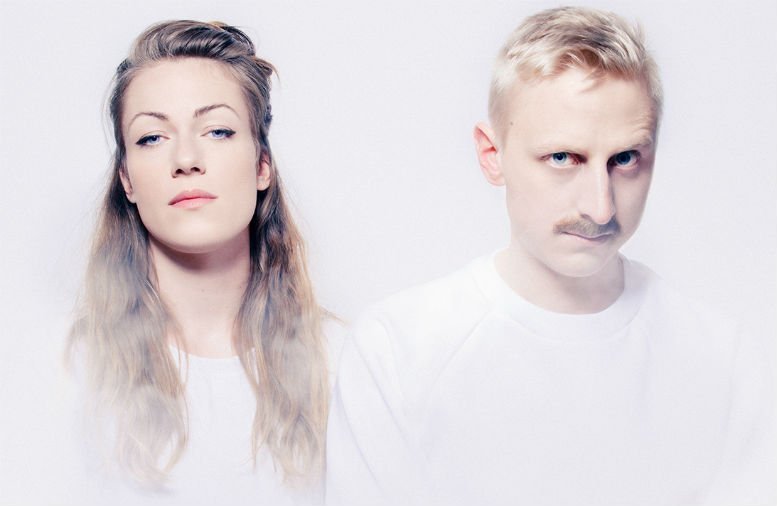 What are you hoping people take out of the new album – are there any themes, for example?

It´s all about seduction, longing, love out of reach or love at its final stage – it´s a very romantic but also quite tragic album. The lyrical “I” is not necessarily me (Charlotte) in every song. I´d like to keep it to myself where it´s fictional and where it´s not. We hope, that people will also want todance, think and kiss when listening to this record.

The first track released is ‘Blue Splinter View’, it’s rather introspective and wintery. Is the whole album like this, it’s quite a departure from your previous material.

No, not everything is like “Blue Splinter View”. That song needed a certain seriousness and perceptible kind of sadness that we felt you can create best when you give the listener not too much to chew on but something to enjoy. It almost tastes like candy and it embraces you with comfort and a pinch of exasperation at the same time.

This album has gotten quite eclectic, it´s everything that we are drawn in ten sketches. We think that Dream-Pop is the perfect synthesis of the best elements of every decade and that´s what we wanted to be: limitless.

Can you tell us what the track us about?

It is about a break-up.

Do you have any plans to come over to the UK?

We would love that and we hope that we can announce a UK show as soon as possible in 2016.

Charlotte, your voice is quite incredible – what other lead vocalists do you look to for inspiration?

Singing is the last thing that I look around for role models so much. It doesn´t work that way. I just sing and want to feel good about it when I do it.

What artists and bands influenced you whilst recording ‘Love Is A Fridge’?

Oh, we re-discovered several artists while we were in the studio like Serge Gainsbourg, which was very inspiring for some string arrangements on the album, or PJ Harveys “Let England Shake”, which is just a perfect album (well, that´s what we think at least) some German Kraut bands like Amon Düül or Can, then we also celebrated to Madonna’s “Ray Of Light” and we love, love, love Broadcast.

Finally, which UK artist or band would you love to tour with?

Do Cocteau Twins count as a UK band? We’d really like to tour with them, if they still exist…“