THE eagerly anticipated adaptation of the 2001 video game Max Payne hits cinema screens this week and I was lucky enough to get a sneak peek.

Since first seeing the ominous trailers a few months ago I had been waiting with bated breath to see Mark Wahlberg as the brooding, gun-wielding detective, dead set on avenging his wife and daughter’s murder, but I have to admit leaving the cinema I was a little disappointed.

The dark movie has it all really – it’s action-packed, the special effects are outstanding, it has grit, the lead characters are easy on the eye – but at times the plot was hard to follow despite the fantastic action sequences featuring Wahlberg as Max Payne.

The story is set instantly, Payne, after the brutal murders of his wife and baby daughter, is relegated to the Cold Case unit where he has been investigating his family’s deaths for the last three years.

And finally the damaged hero catches a break.
Thrust into a world of drugs, gangsters, conspiracies and something almost supernatural, Max must stay alive long enough to take his revenge. 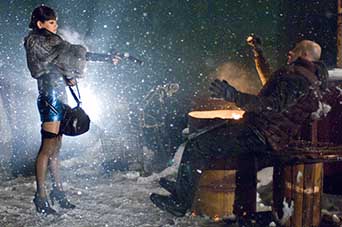 He along with Russian mob boss, Mona Sax, played by That 70’s Show star Mila Kunis, battle for the truth, climaxing in a huge running gun fight.

For fans of the comic style movie this film ticks all the boxes but for me the plot needed to be developed a bit more.

The film did well at the US box office and fans are already speculating about a sequel, especially after seeing the hidden scene when the credits rolled – hint hint stay in your seat if you want to catch a glimpse.

If a sequel was made, with Wahlberg in the title role, I would go and see it – hopefully the balance of special effects and plot will be better managed in Max Payne 2.