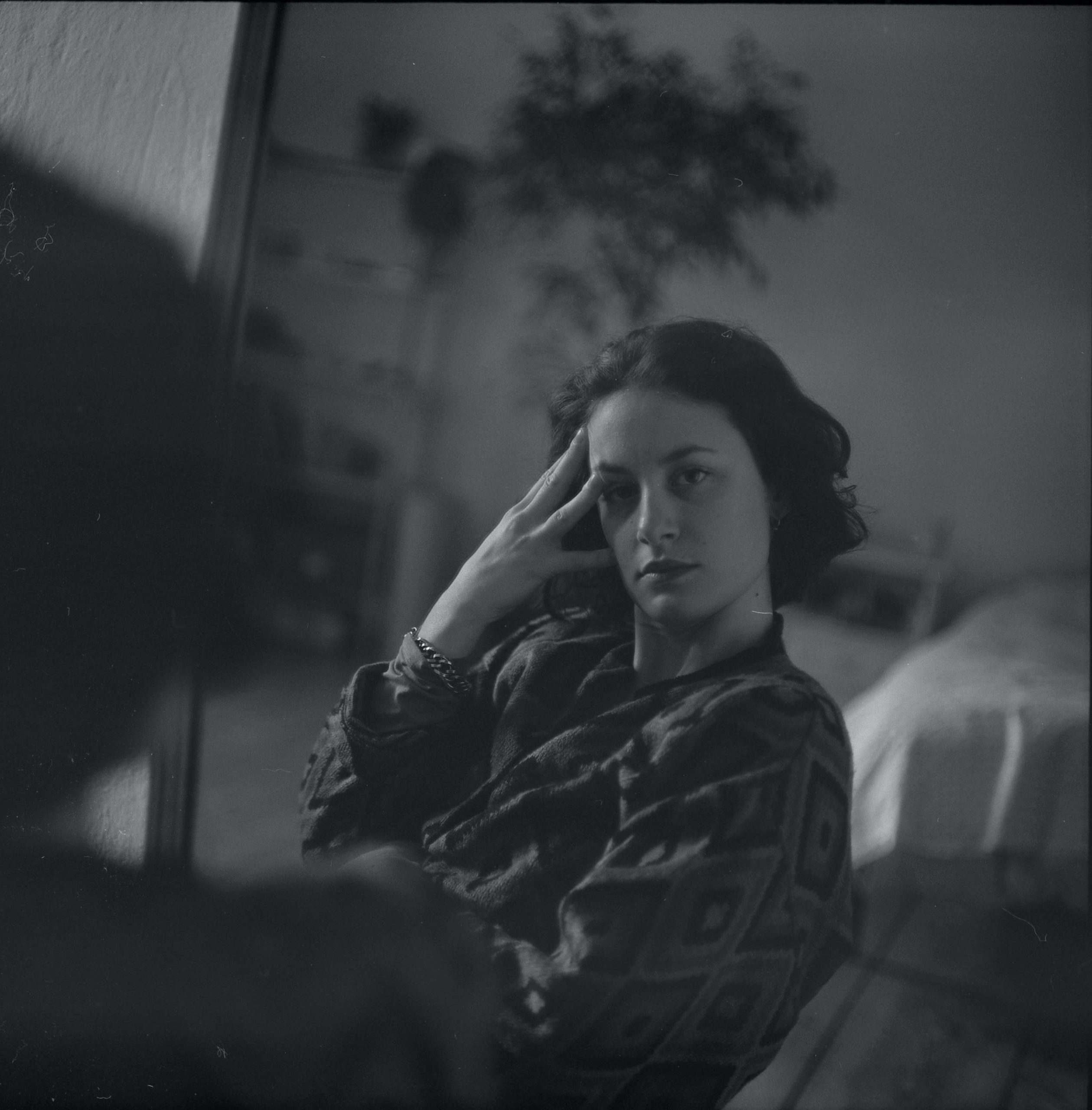 With her sophomore release, the five-song EP titled La Stanza Verde (The Green Room), Margo Sanda delivers one of those releases that absolutely defies any categorisation.

Technically, you could say that this is avant-pop, but with a singer-songwriter touch. But that’s how it appears on the surface, as these songs are full of far-out interjections of Arca-like  soundscapes, and the type of programming that evokes Caroline Polachek’s work circa Arcadia. In a way, these songs are both alien and accessible, if not straight welcoming.

If there’s a single word that could describe this music, that would probably be enchanted. Because listening to these songs you feel like you’re stumbling around a magical, sensual world where everything feels both new and awe-inspiring. It’s as if you’re finally seeing reality clearly, the way a child does. Your senses wide-open, inhaling life as is.

Which kinda makes sense if you take into account that this is a record about self-discovery, one made from field recordings that were sourced from daily life. A great deal of which took place out in nature, where Margo spent her time while recording this material. It’s worth noting that Margo does just about everything on this record. She sings, she plays the acoustic guitar, manipulates and programs field recordings. She also produced, arranged and mixed the whole damn thing!

Margo is an Italian expat living in Berlin. She is a producer, singer and multi-media artist. We caught up with her for a refreshing and winding talk about music, life and politics.

Northern Italy has been in the news a lot in the past few months, as it was one of the most affected regions in Europe during this pandemic. You come from there! What’s the situation there, right now?

It’s definitely different from how we experienced it, here, in Berlin. People in Italy have been literally locked down, in quarantine, for more than two months now! They can only go out for shopping. Here, we can move around and take walks in the parks. They are slowly opening things up, but the situation is still complicated. I’ve heard from my friends who live in Brescia that some venues turned into radio stations, which host live performances. I’ve also been told that they’ve been meeting on this thing called ‘covid-room’ – inspired by the Boiler Room – to dance together on Friday nights. I feel that they’ve found a way to really feel close to each other, and to exchange creatively. What’s also amazing is that that a lot of my artist friends also started to ask themselves questions in regards to their relationship to what they do. They are trying to envision a future where they are not only pursuing their own happiness, but also helping the world.

Your new release is about many things, and we will discuss a lot of them in a minute, but because we are already talking about Italy, I wanted to ask you about your relationship to your roots. You made a conscious decision to sing in Italian on this release,  what happened? I mean, you live in Berlin now…

Well, I don’t know so much about this decision being conscious. I think that it was more of a need. I just wanted to try writing and singing in Italian. I started making music quite late, by today’s standards, singing even later, so my journey to discover my own voice has been and still is the biggest challenge for me. With my first EP, where I sang in English, I opened up and started to share my feelings, stories, but looking back on it, my voice didn’t fully reveal itself, yet. Then I made a cover of a song by Mina, who is one of the most famous Italian artists from the 60s. Through this I realised that when I sing in Italian my voice frees up. I can actually open my mouth more and relax my tongue and, as a result, deliver my emotions more directly.

The most important theme, which echoes throughout all of these songs, is this sense of you are finally finding and accepting yourself, and a big part of this is you coming out. Do you think your experience would be much different if you were still living back in Italy?

I don’t feel comfortable painting a picture of the town where I grew up as a bedrock of conservatism. It’s more about how I’ve lived, which created my particular experience. I know stories of other people, who lived out their ‘queerness’ with a lot more ease than I did. I will just say this: I have never felt free to do or say or be the many things that I am where I grew up. I felt judged. I’ve been bullied. For real! I’ve suffered a lot, but I couldn’t show this suffering. I felt different from everybody who was around me at that time, and I didn’t understand why. Berlin is a paradise, in this regard. But its not like you come here and from one day to the next you find yourself and your own freedom. Or, at least, it didn’t work like that for me. Being here, allowed me to start a process of accepting and discovering myself.

Is there a scene for queer politics and music in Italy?

I think that me identifying as queer does not have a purely political value, but it’s something more existential. There are, of course, artists who fly the queer flag like that. And there are parties, as well, I’m mainly thinking of Milan. But I have to say that I don’t know so much about these things to speak on them properly. I was never really involved in the scene. I also don’t feel an affiliation with these type of parties and the queer parades etc. I never did. Accepting myself doesn’t depend on me dancing freely at a party or wearing crazy things. I love the fact that we have all these options, and they are powerful, for sure, but it’s just not my thing. Anyway, I prefer going out to concerts more than parties. And the small ones, really! Or events at theatres. I don’t really like big crowds

What makes your music so rich is your treatment of sound and the fact that most of it was sourced from field recordings. Where does this obsession with the sonic fabric and texture come from?

I think, foremost, this comes from the experience itself, which is what gave birth to all of these songs. I literally escaped from Berlin two years ago and spent three weeks out in the nature. I was suffocated by city life and stress and the noises, the pollution and how grey this city can get. I was also in some pretty confusing relationships, at the time. The sounds of nature helped me heal and reconnect with myself. So I used these sounds, the ones that helped me heal, in the production of these songs. I’m really interested in sound ecology. I want to capture the sounds that are around me, and through manipulation and production craft them so that they eventually become messengers for my emotions. Especially, for the ones that we don’t have the language for.

You traveled quite a lot during the writing and recording process, right?

I’ve been to Austria, where a dear friend of mine hosted me for about eight days. He lives in this tiny village in the middle of the Austrian Alps, right by a lake. This was the perfect place to start. My friend is one of the most uncomplicated and true person that I know. I think that I needed to be close to a person like this, at this time, as opposed to ‘city people’ with their drive for success etc. I also spent a week with my uncle, who is a professional musician and a teacher. I stayed at his house in the mountains, in Northern Italy. I recorded him singing some choir arrangements and playing antique instruments. We recorded a spinet and a clavichord. Their presence added that acoustic and timeless sound to these songs. Finally, I went to my parent’s place at Lake Garda. It’s also a very beautiful place, surrounded by nature, and very peaceful. I didn’t really plan any of this, it just happened.

You did practically everything on this EP! You wrote the songs, produced them and even engineered them – did it just pan out like that or was it a personal challenge or a political stand? Or maybe you’re just a control freak? (laughter)

I always did everything by myself! Right from the very start. I don’t think that this was a decision, it just sort of made sense to me, to do it like that. I never understood why I should be giving my songs to someone else, for them to produce them for me. The choice of every sound, every detail, every effect is extremely important to the final result. It’s my work, so these choices should also be mine. My music might be imperfect and naive at times, maybe, but it’s mine! From the lyrics all the way down to the choices of reverb on the backing vocals. I’m definitely looking forward to collaborating with other artists, but I want the collaboration to be like a deep experience of sharing. I don’t want to feel like l I’m hiring somebody to record a violin part for me, for example. Everything should come from a genuine relationship.

The name of the EP is La Stanza Verde (Green Room). What is it exactly and what does it mean to you?

The Green Room (La Stanza Verde) comes from the title of one of the songs on the EP. In this song, I’m talking about waiting for a person to accept me, and I’m describing a room which would be greener if this person would be there with me. Greener in my world means happier, more alive. Green was always my favourite color, it means life to me. It also reminds me of the place where I grew up. When I wrote this song, I was thinking about a specific person. I wanted them to accept me. Much later, I realised that for this to happen I would have to accept myself, first. When I was making these songs I felt like I was in this mental, safe-space, somewhere far away from reality. And this space feels like a room to me. I can go there whenever I need to, and look at what I’m hiding from myself and allow it to come out.

I think that we all deserve access to a green room!…