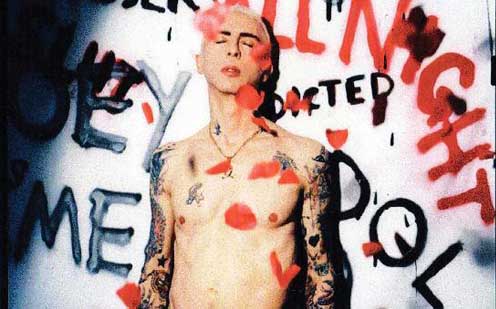 I suppose I am a survivor since I am still here recording an album, says Marc Almond.

But Marc hasn’t only survived that near-fatal motorbike crash on 17 October 2004, that put him in a coma for two weeks, included emergency surgery and a protracted, agonising but triumphant recovery from critical injuries; he’s survived the vagaries of fashion and trends, solo voyages and band reunions, creative highs and writers-block lows, acceptance and rejection, love affairs, the death of loved ones and collaborators, the passing of time. He has lived, alright. Like a cat, Marc appears to have more than one life.

All the above, and most likely much more, can be found on his new album Stardom Road, the first he has recorded since his accident.

With one exception, it’s an album of covers, chosen and sequenced to tell Almond’s story no wonder, with such a life-threatening trauma, that he has taken stock of how he has lived that life to date.

Each song is a chapter in that life; so Stardom Road resembles not just an album but a play, which clearly suits a man who comes alive on stage, whose songs have always resembled dramas, whether they are underpinned by fizzy synth-pop, 60s-inspired pop kitsch-arama, bare-naked acoustic ballads or orchestrated splendour. All of these, as you can imagine, can be found here too, spanning the divide between the Jim Reeves of Bedsit to the Judy Garland of the Garbage Heap.

There can’t be many who don’t know Marc’s rollercoaster career. From Soft Cell, the first successful British electro-duo in partnership with Dave Ball, with a string of international hits (‘Bedsitter’, ‘Numbers’, ‘Torch’ ,’Say Hello Wave Goodbye’ and, biggest of all, their version of northern soul classic ‘Tainted Love’, while ‘Memorabilia’ is cited as the first techno record ever).

10 million-plus worldwide record sales later, Soft Cell are a British icon, influencing several subsequent generations of musicians – from Pulp, The Pet Shop Boys and Suede, to Goldfrapp and onto Antony Hegarty of Antony & The Johnsons fame.

Marc’s solo career has equally glittered; from Vermin In Ermine and The Stars We Are, which spawned the UK number one (and international hit) Something’s Gotten Hold Of My Heart, a duet with the late Gene Pitney. From the Trevor Horn-produced Tenement Symphony, which included another cover smash, The Days Of Pearly Spencer, to his tribute album Jacques to Jacques Brel (Marc brought the 60s Belgian icon back into the charts with Jacky).

From a twin album of French songs to Heart On Snow, a three-year labour of love recorded in St. Petersburg and Moscow and featuring a cross section of Russian singing stars and musicians.

From his first autobiography, 1999’s Tainted Life to his second, 2004’s In Search Of The Pleasure Palace. Not to forget Soft Cell’s reunion in 2001 for concerts and the Cruelty Without Beauty album, or Marc’s burgeoning DJ career, in his role as godfather of Electroclash.

Marc has fought back to regain much of his previous status as a singer and songwriter and though he realises that many aspects of his life will never be the same again, he retains his unique way of looking at life through his humour and optimism. There is clearly more to come from this unique, captivating character; some drama, exhilaration and probably some tears, but at least Marc knows what it is to be alive.