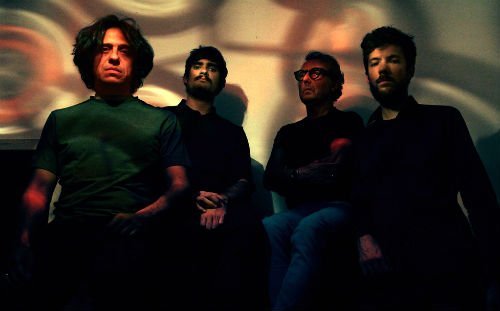 First up, what’s the story behind the name Mamuthones?

I chose the name a few weeks after leaving Jennifer Gentle and before recording anything else. To tell you the truth, in that period I didn’t have any idea about my musical future. I was in Sardinia for work and I was impressed by this mask photo I saw. It was archaic, scary and intriguing all at the same time. I asked about it and I decided that my new musical project would be called Mamuthones, then I bought an air organ and I started recording.

Can you tell us 5 things we should know about the band?

In the beginning it was only me and in some way this is still my solo project…even though now we are a band.

In this band there are members coming from 3 different generations. Maurizio Boldrin was born in 1948, me in 1973 and Matteo Polato in 1988. There are 40 years between Maurizio and Matteo, you have to admit this is quite strange!

We already did three studio albums but this split is the first thing we published in which we played together. 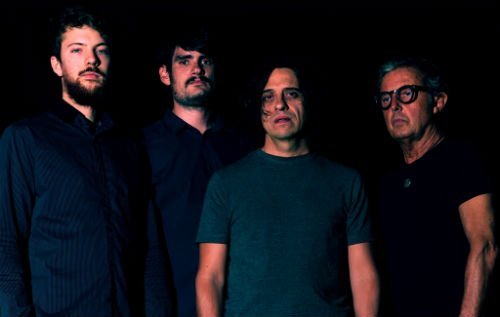 Tell us about the idea behind the track and the video for ‘I’ve Gotta Be’?

Well, everything started with the Holy Ghost People documentary. It is a 1967 documentary directed and narrated by Peter Adair about the service of a Pentecostal community church in Scrabble Creek, West Virginia, United States. The service includes faith healing, snake handling, speaking in tongues and singing, the original documentary has recently entered the public domain and is available at the Internet Archive.

I sampled some voices from the documentary and I “built” two songs starting from this, ‘The Holy Ghost People’ and ‘I’ve Gotta Be’.

Now our side of Collision Vol.4 is titled ‘Taking up Serpents’ which is taken from the Bible (“In my name they will drive out demons; they will speak in new tongues; they will pick up snakes with their hands; and when they drink deadly poison, it will not hurt them at all”)… the verses from which the “Holy Ghost People” based their rites.

When we started to think about the video it was obvious to use the documentary. The character in front of the projection is doing his own thing but when the music “explodes” you see that something happens and in the end he is part of the community.

Why did you decide to release Collisions Vol.4 split LP w/ Evil Blizzard ?

To tell you the truth, we sent Rocket an entire album but they were not convinced, even though they loved a couple of tracks. After some weeks, maybe a couple of months, Chris offered us the possibility to do this split. The initial idea was to use only ‘I’ve Gotta Be’ and do a remix of that track (like Evil Blizzard did).

For me this was something new, the split and the remix idea, but I was happy about the split, Evil Blizzard are a cool band and I think our sound match’s theirs very well. I’ve never done a remix so I preferred working on our three other tracks which have been developed with more attention on the groove compared to the first version we sent to Rocket. Now we are very satisfied as we’ve had the possibility to develop our sound to a new direction which was only sketched before.

What’s the situation in Italy with the psychedelic movement?

In recent years there is this new definition, “Italian Occult Psychedelia”, which umbrella’s a lot of cool bands like Lay Llamas, Father Murphy, Heroin in Thaiti, Squadra Omega, La Piramide di Sangue, Mai Mai Mai, and many others.

Italian Occult Psychedelia is not a musical genre. I think many bands play everything, but not psychedelia. They identify a common attitude, a common link with Italian tradition, historical and cultural obscure tradition. This is interesting because in the last 20 years, Italian bands, and also underground bands, were deeply influenced by foreign trends in a bad way and just tried to imitate the “band of the moment” without a contextualization.

I think these “occult” bands have a particular “touch” which is Italian, but in a different way. I mean, it’s not traditional folk, it’s something closer to no wave, or kraut rock but with the Italian taste.

What has been the hardest part of being in the music industry for a band like yours?

That the music industry ignored us since Rocket offered this possibility!!!

You should be there because it is violent, hysteric, powerful and at the same time danceable, and because it could be Maurizio’s last concert with us.