MAMMA MIA!, the smash hit musical based on the songs of ABBA, will return to Odyssey Arena Belfast from 10th to 29th March 2008.
MAMMA MIA! sold out its run at the Odyssey in March 2006 and now returns for 18 nights as part of its International Tour. 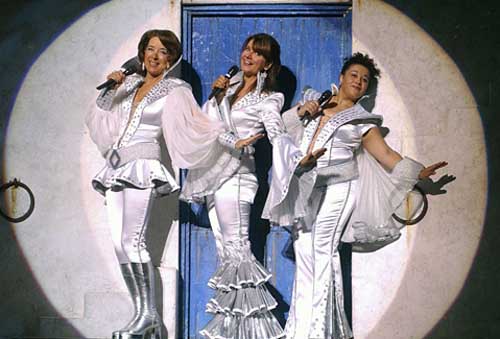 Inspired by the story-telling magic of ABBAâ€™s timeless songs, writer Catherine Johnsonâ€™s sunny, funny tale of family and friendship unfolds on a tiny Greek island. On the eve of her wedding, a daughterâ€™s quest to discover the identity of her father brings 3 men from her motherâ€™s past back to the island they last visited 20 years ago.

The production features 22 of ABBAâ€™s hits including: CHIQUITITA, DANCING QUEEN, I HAVE A DREAM, KNOWING ME, KNOWING YOU, THE WINNER TAKES IT ALL, SUPER TROUPER, TAKE A CHANCE ON ME and VOULEZ-VOUS.

With more productions playing simultaneously around the world than any other musical, MAMMA MIA! is the worldâ€™s number one show with 10 current global productions ( 8 resident productions and 2 tours).

Since its stage premiere in 1999, MAMMA MIA! has gone on to gross over Â£155 million at the UK Box Office and over $2 billion worldwide. More than 30 million people have seen the show worldwide.